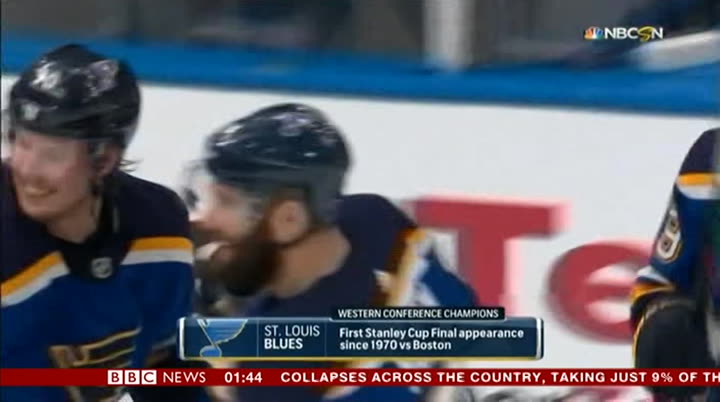 and in the next few minutes, the st louis blues take to the ice in their first stanley cup final series for 49 years, when they play the boston bruins in game one. hello and welcome to the programme, where we start with the tennis news that 23—time grand slam champion serena williams is through to the second round of the french open at roland garros. the three time winner in paris needed three sets though to get past russia's vitalia diatchenko, but it was a better day for another russian in veronika kudermetova who accounted for former world number one caroline wozniacki as sarah leach reports. 24 2a hours after angela kober was knocked out, another shock in the women's draw, caroline wozniaki dominated in the first set but her firm plummeted. she paid for her
1:46 am 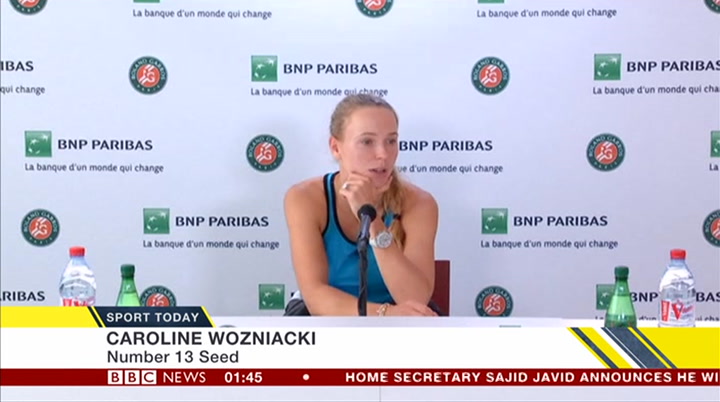 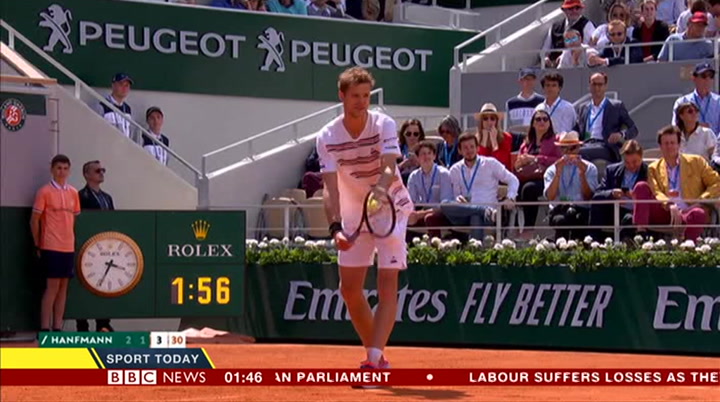 to set up a clash with another german qualifier. the dull‘s claim form has been inconsistent but he is still the man to beat at the french open. —— rafael nadal. of course it is at the beginning and the first round is more about talking about what i have to do better or what i did very well together. it is about the general feeling and they have been positive. just happy to be free to the second round. —— through. top seed novak djokovic also notched a routine first round win, beating hubert hurkacz of poland 6—4 6—2 6—2. the is—time grand slam champion, who's aiming to hold all four grand slam titles at once for the second time in his career, will face swiss lucky loser henri laaksonen in the second round.
1:48 am 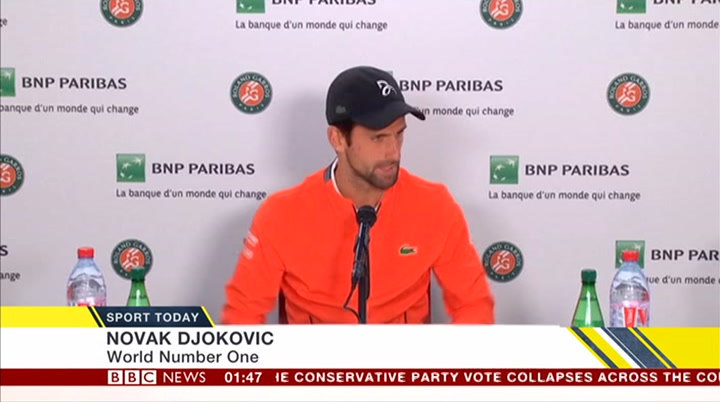 i like the fact that i had, you know, a good quality opponent in the first round because that gets me going with the right intensity from the start. i am focused, determined, and sharp from the blocks and that is what happens stop even though i have never played him, faced him in an official match, i felt he could bea an official match, i felt he could be a great friend if i allow him to play his tennis so i actually thought i played well and all the elements in my game worked well so i am very pleased. now to football where aston villa are back in the premier league after they beat derby county 2—1 in the championship play—off final at wembley, where patrick gearey was watching. so it's aston villa who return to the premier league after three seasons away in the second—tier championship. they will benefit by at least £170 million across three years and that could go up to £300 million if they managed to stay up for one season. it was a pretty entertaining play—off final that we had
1:49 am 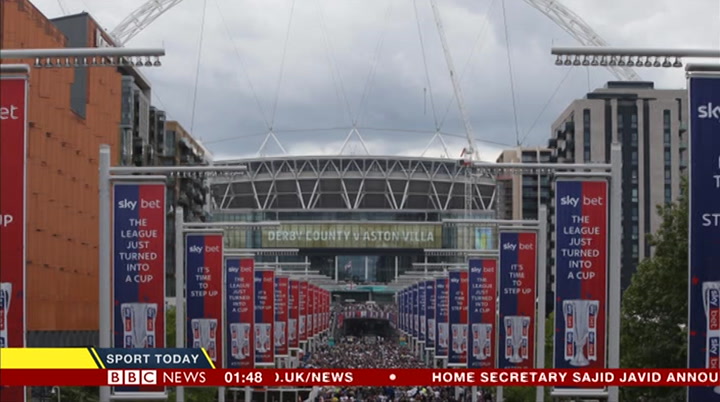 here at wembley stadium. the deadlock was broken when anwar el ghazi shouldered the ball in just before the break — a key time to score, of course. villa went 2—0 up when kelle roos dropped the ball under pressure from john mcginn of aston villa. 2—0 to villa, a terrible time to make a mistake like that. derby then had to go to try and save their season and they only had around 20 minutes left. with about ten of them left, they did get one back. jack marriott's shot. we think did touched in by martyn waghorn. we're not clear if he got a touch but it was pretty academic. it was all about then whether derby could get that equaliser. prince william, in the stands, could hardly bare to watch. there was so much tension in wembley, and it was all released on that final whistle. villa utterly jubilant. derby completely gutted. they will have to stay in the championship another season. villa will, of course, be much richer. a club that are former european champions, former english league champions, will feel that they belong in the premier league and that is just where they will
1:50 am 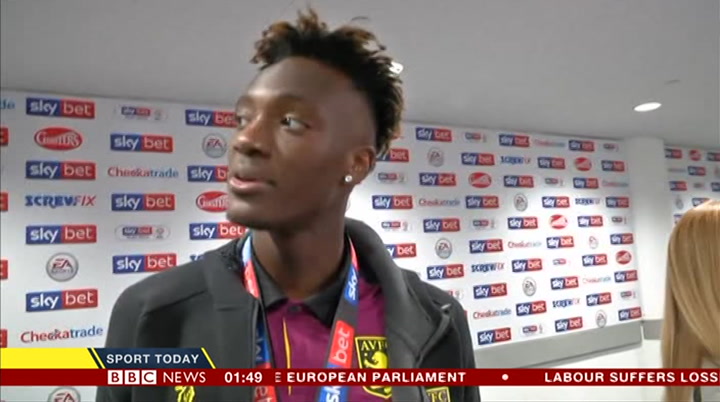 play their football next season. iam sure i am sure a lot of people didn't think we were going to make it. we just had to dig deeper. we had ten wins ina just had to dig deeper. we had ten wins in a row which really helped us. wins in a row which really helped us. it goes to show the character the boys have, fight to the. it has been a fantasticjourney, one i will never forget. in germany, union berlin have been promoted to the bundesliga for the first time ever after they defeated stuttgart on the away goals rule to win the relegation/promotion play off match. the opening match finished 2—2 in stuttgart last thursday with the second leg goalless in berlin despite a second half that saw union hitting the post twice. while stuttgart were denied by a fine save in the closing minutes and the final whistle sparked joyous scenes as the club that twice nearly collapsed finanically since reunification are now a part of the games top flight. it's the europa league final on wednesday, with an all—english affair between arsenal and chelsea. hundreds of fans have already
1:51 am 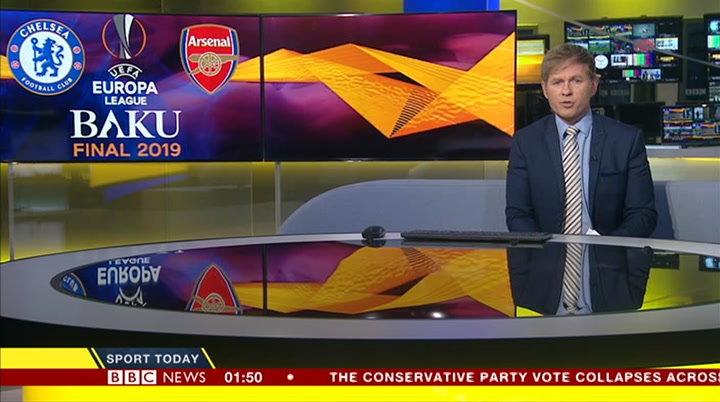 started the mammoth trip from london to azerbaijan where the final is being held, and our sports correspondent david ornstein is in the capital baku. welcome to the olympic stadium, the venue welcome to the olympic stadium, the venue for the 2019 europa league final where the last preparations are taking place. we have arrived and have seen supporters from both teams. many more to come. half of the allocated 6000 tickets had been handed back by the clubs. arsenal sold them all. chelsea lasso and both clubs expecting quite a few fa ns both clubs expecting quite a few fans internationally as well. arsenal arrived on saturday so they have already been training in the capital. chelsea arrived today. they have a reported injury concern over
1:52 am 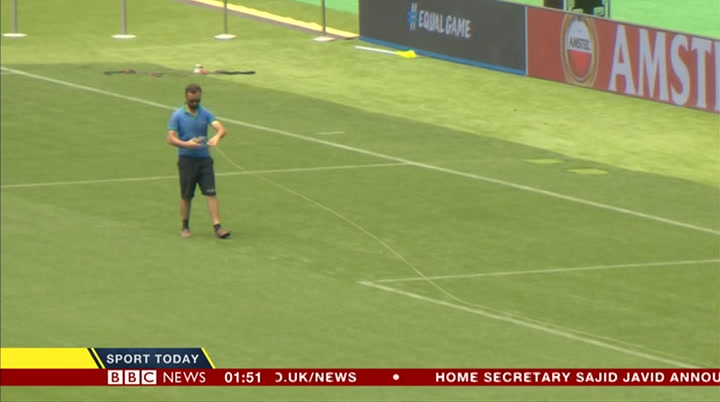 ka nte. have a reported injury concern over kante. both sets of players will be here to train and hold news conferences. the match is on wednesday, eight o'clock kick—off uk time 11pm locally. the match has been dominated by non— footballing issues, tickets, visas, politics but gradually the focus will shift to the game. it will be pretty warm, in excess of 20 degrees but nothing too perturbing for either set of players. one of the biggest sporting events this country has ever staged. now to cricket where england warmed up for their opening world cup game against south africa on thursday by thrashing afghanistan by 9 wickets in their final warm up match at the oval in london. jofra archer and joe root both picked up three wickets as the afghan‘s were dismissed for 160 and in response 89 not out from jason roy led his side past the target for the loss ofjust one wicket with more than 32 overs to spare. england captain eoin morgan says it's a positive finishing the game early.
1:53 am 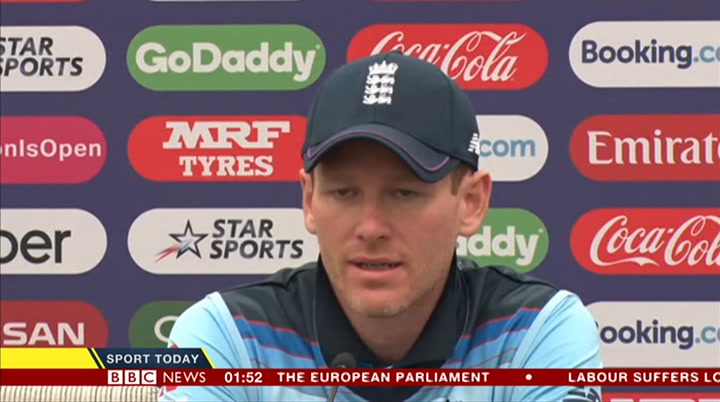 i think, when you play as convincingly as that, it feels confidence in the hard work you do both in training and in the game. and if the other side of it is it does give you the afternoon and early evening to switch off. you know playing another close game against the strong side. so a lot of positives from today. also on monday, australia beat sri lanka by five wickets in theirfinalwarm—up match in southampton. sri lanka made 239 for 8 while australia reached their target with 31 balls remaining as usman khawaja top scored with 89. we say that amongst the team, we try and win all the games we play. just to keep that habit going. i thought we found form again leading into the world cup.
1:54 am 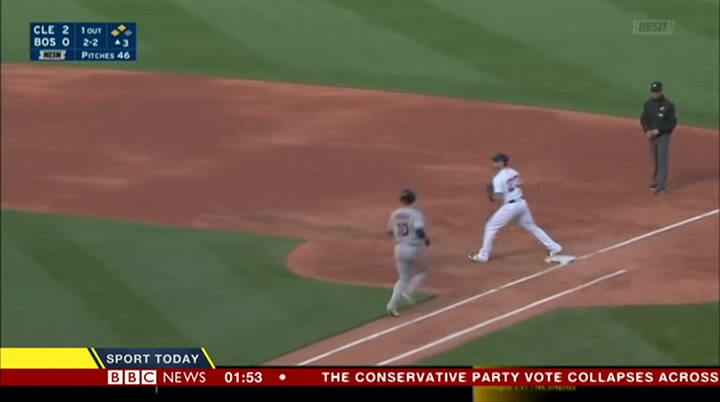 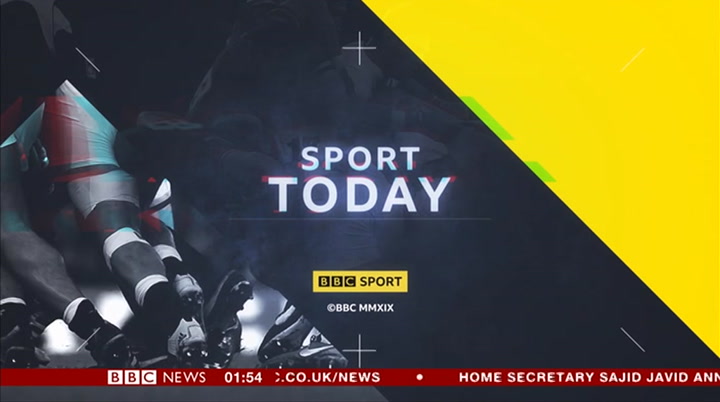 by. good morning. our final bank holiday of may has been and gone now. it was a tale of two halves, really. the best of the weather was down into the south—east corner on monday — in the london area where we saw 20 degrees, 68 fahrenheit. further north, a beautiful weather watcher picture was sent in. but it was a cold, grey, slightly disappointing story in parts of aberdeenshire with just a daytime maximum of 11 degrees. this is important because the cold air that has been sat across scotland throughout the weekend will push its way steadily southwards, taking the milder air back into the near continent as the northerly winds are set to win out for a couple of days at least. but hopefully only a short, sharp shock. more on that in a moment. the north—westerly direction will drive in some showers
1:56 am 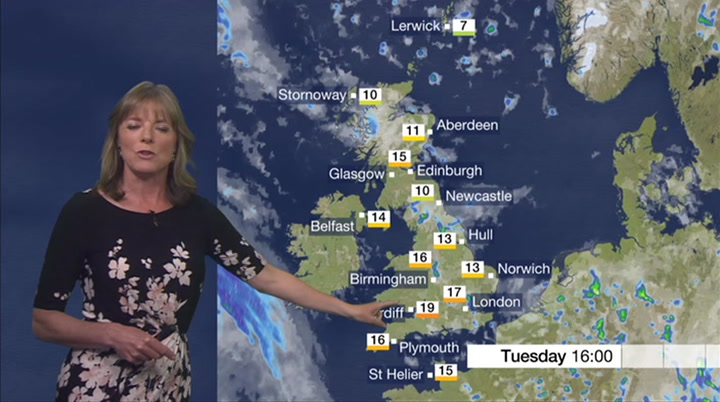 across the western isles and running down through the north sea we could see a rush of showers being driven in along the east coast during tuesday. sheltered western areas perhaps seeing the best of the drier, brighter weather but it will be a degree or so cooler than it has been, 10—19 as the daytime maximum. moving out of tuesday, the winds will start to fall light and skies will clear. so a chilly start to wednesday morning before another series of weather fronts push in from the atlantic. during the early hours of wednesday, we will start to see it clouding over from the west but with clearer skies further east, the temperatures are likely to fall away and it could be a chilly start for one or two of us with low single figures first thing on wednesday morning. but the cloud and the rain continues to gather and here it will sit across south—west england and wales. so eight degrees as a minimum. three or four along the east coast. we start off on a chilly note but with some sunshine around first thing on wednesday. the cloud and the rain gathers and continues to push its way steadily east as we go through the day. there is a level of uncertainty as to just where this rain is going to be sitting by the middle part of the week but it looks as though it will light and patchy as it continues to push
1:57 am 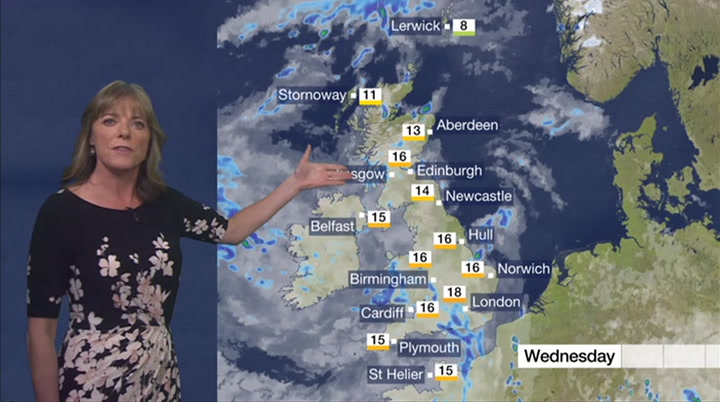 in across the country. further north, a largely dry affair but not particularly warm, 11—18 degrees. as we move out of wednesday, we see that weather front and area of low pressure continuing to drift steadily north and high pressure builds from the south. but more importantly, the winds change direction again and swing back to more of a south—westerly direction, driving milder air once again back across the country. so it's half term for many this week and it does look as though the silver lining is — as we head towards the weekend, for many of us, it will be sunnier and warmer again. the only exception again, the far north of scotland. that's it, whatever you're doing, enjoy if you can.
1:58 am 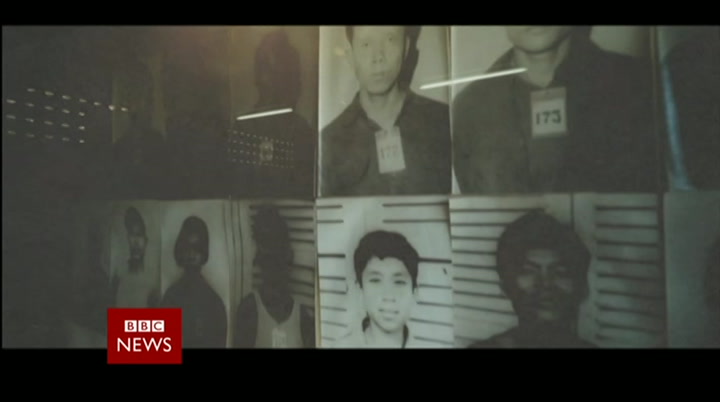 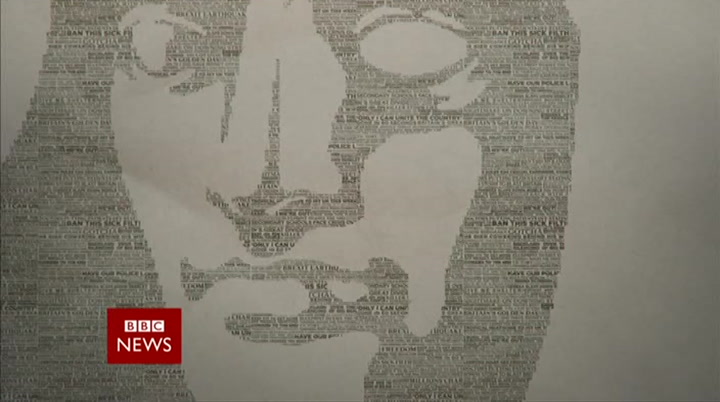 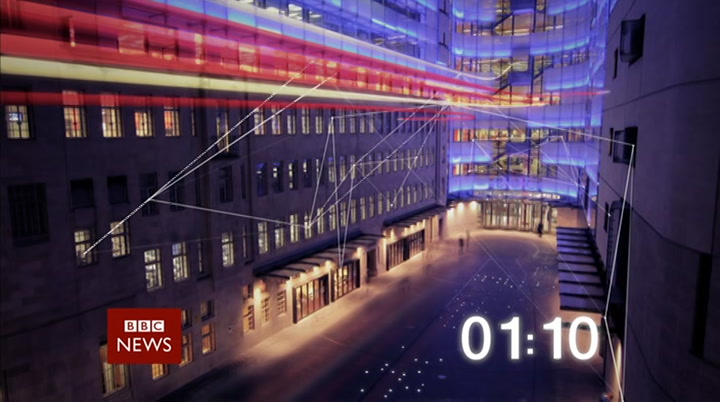 welcome to bbc news — broadcasting to viewers in north america and around the globe. my name is duncan golestani. our top stories: president trump's 4—day visit tojapan draws to an end with north korea and trade on the agenda. austria's chancellor, sebastian kurz, and his centre—right government are removed from office by a vote of no—confidence. after the election shake—up — who will europe's new meps choose to lead the commission? and queen victoria smiles in new clearfootage —
left
right
Borrow Program
tv

All the latest sports news and results from around the globe.