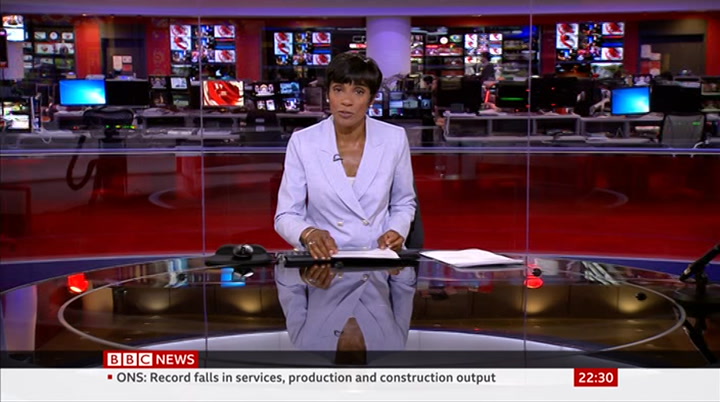 sits alongside this country's ancient traditions, and whatever international tensions exist, this focus on persian culture is a chance to grasp how iranians see themselves and their place in the world. samira ahmed, bbc news. and samira's series art of persia starts next monday at 9pm on bbc four. that's all from us this evening. newsnight is coming up on bbc two at 10.45 with kirsty wark. now on bbc one, it's time for the news where you are.
10:31 pm 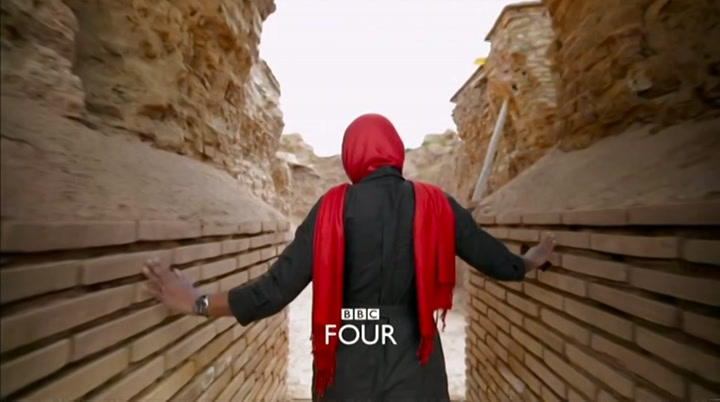 welcome to bbc news. i'm samantha simmonds, it is now time for us to take a first look at the national and international front pages in the papers. hello and welcome to our look ahead to what the papers will be bringing us tomorrow. with me arejoe twyman, director of the polling organisation deltapoll, and susie boniface, columnist at the daily mirror. very good evening to you, thanks for being with us. let's take you through those front pages.
10:32 pm 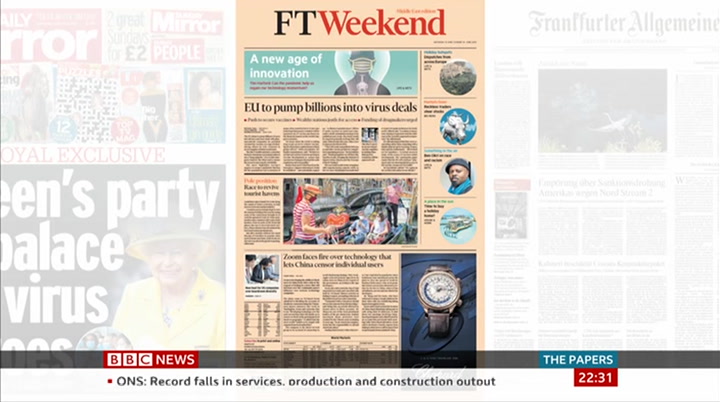 the international edition of the ft goes with an eu plan to pump billions of euros into advance purchase deals with pharmaceuticals companies for potential coronavirus vaccines. the paper says it a sign of intensifying efforts by rich countries to secure supplies of future treatments. in germany, frankfurter allgemeine says the german cabinet has approved a coronavirus stimulus package worth 130 million euros. it includes a temporary reduction in vat and a one—off payment of 300 euros er child to families. back in the uk, the daily mail goes with the story that the monument in westminster to winston churchill has been boarded up to protect it from protesters. the paper cries "let our greatest hero free" in a call to uncover the statue. the times says the uk prime minister, boris johnson, will try to reassure britons that it is safe to get out of the house and spend as non—essential stores open
10:33 pm 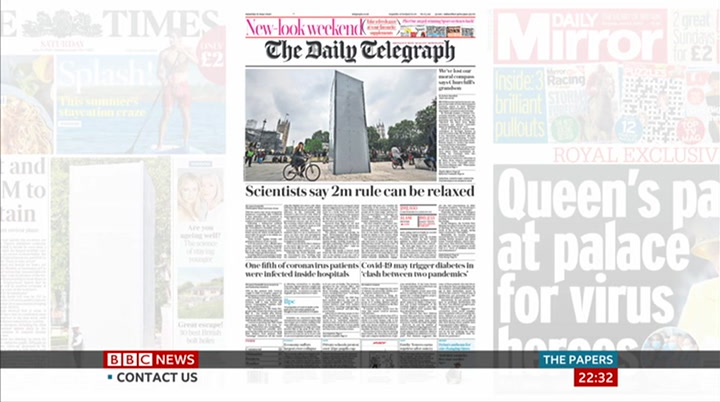 from monday, as the government tries to revive the country's battered economy. the daily telegraph says uk government scientists have told ministers that the two—metre social distancing rule can be dropped by businesses reopening after lockdown if they introduce other measures to reduce the spread of coronavirus. and the daily mirror says front line workers — what the paper calls britain's coronavirus heroes — could be rewarded with a palace garden party hosted by the queen. so, let's begin. susie and joe welcome to both of you. let's start with the ft and this is the story about prime minister borisjohnson this is the story about prime minister boris johnson being this is the story about prime minister borisjohnson being pressed to relax the two metre rule after the economy collapses 25%. susie, should we be doing that you restart the economy and giving at the boost it needs? that is the principal reason behind all the push to drop the two metre rule. science seems to be slightly up in the air whether you need to have two metre per
10:34 pm 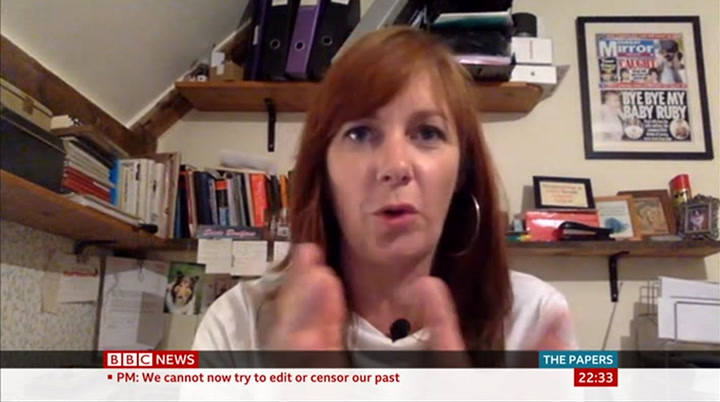 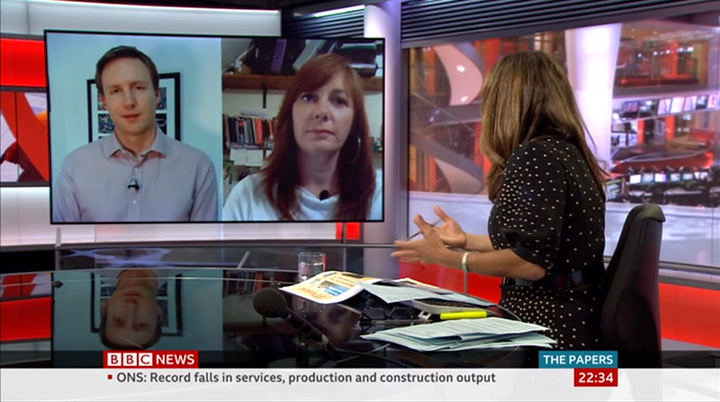 distancing to one metre would give us distancing to one metre would give us all a boost and we would feel reassured that we could go to the shops, could potentially see restau ra nts shops, could potentially see restaurants reopening and bars reopening again or some will say save the service sector? the polls suggest not. the posted —— consistently suggest that the people are hesitant, weary and to be frank concerned about the situation. today could really be the first day of the next stage of the coronavirus pandemic. we knew that information about an economic slump was inevitably going to come. we knew that news would be bad. it turns out it is worse than many people expected and in norma's by historical standards. the question is whether this will change the public's view and conception of the coronavirus. —— and in norma's by her restorable centres. at the moment we have seen this in health terms. people are concerned about losing their wives as a result of
10:36 pm 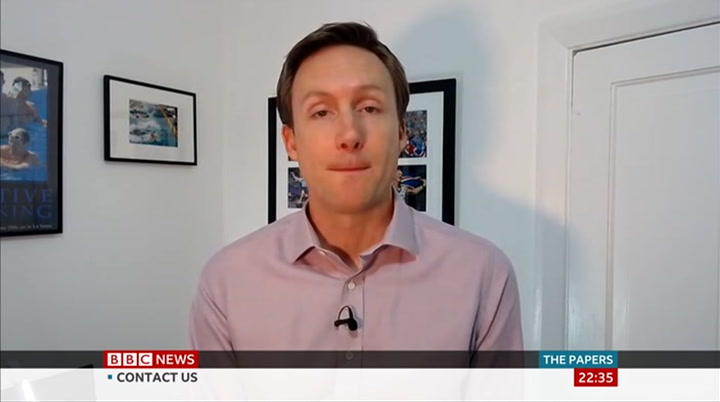 the virus. but of course a mac it —— a massive economic slump and contraction of the economy, people losing theirjobs by the hundreds of thousands and the millions. wages contracting by huge amounts, all of that has a consequence and unfortunately people will lose their wives as a result of the economy contracting as well. —— lose their lives. the government is in a difficult position, they have to balance things and up until now people by a margin of three to one have been more concerned about the potential of lives being lost rather than wives being lost as a result of the economic downturn. but as more data gets out to the public, we may see the public changing their mind and coming around to the idea that something at least to some degree has returned to normal and that they have to play a role in that. the question is whether the government be able to sell at? because at the moment all the indications are that they have not been successful yet.
10:37 pm 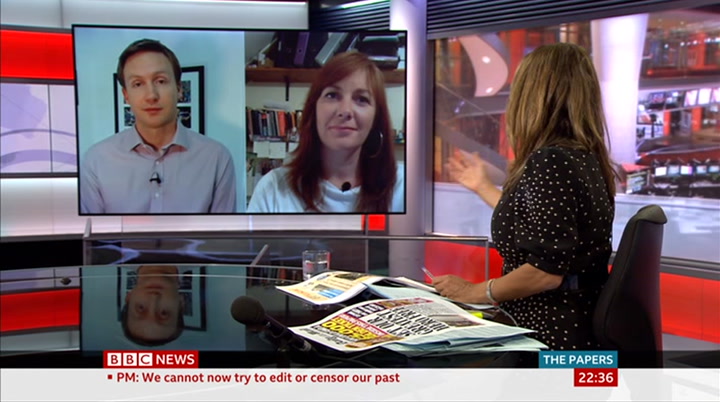 susie you are shaking your head there because anecdotally, i am sure you know it lots of people, i know people who have had enough and want normality and want to be able to sit ina normality and want to be able to sit in a restaurant or outside as we have seen in france for example where they have allowed those to reopen, they want to some kind of sense of reality to come back. joe has all the figures at his fingertips with people saying they are not reassured and are still scared but do you think people gradually over the next few weeks will start to resurface and perhaps go out to a cafe if they were to reopen? it's that thing that joe said that was absolutely critical. the government's ability to sell. a government can only govern if it has authority and that authority is given to it by a populace that trusted and relies upon it and has faith that it has our best interests at heart. regardless of what you think and how you vote and whether you like boris johnson think and how you vote and whether you like borisjohnson wrote, there have been repeated u—turns on
10:38 pm 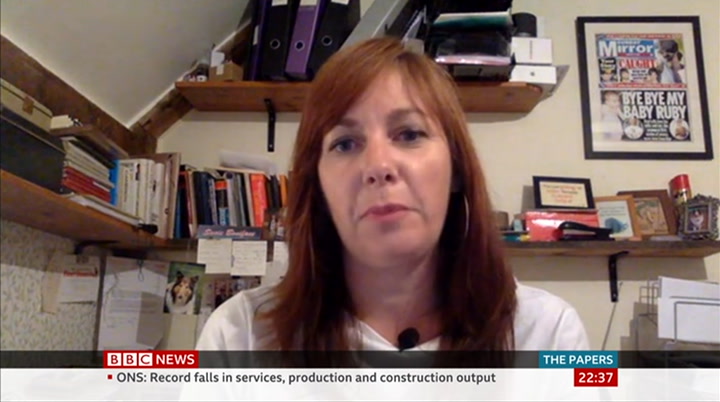 scientific advice, ppe, there been statistical issues some of the data put out by the government, and we do have one of the highest death rates in europe. we also —— perhaps a link to our obesity crisis and maybe nonporousjohnson, but to our obesity crisis and maybe nonporous johnson, but we to our obesity crisis and maybe nonporousjohnson, but we have a massively high death rate. again this is anecdotal, i do not know anybody whether they voted brexit, whether they voted remain, whether they voted tory, whether they voted labour, who trust borisjohnson to do anything any more and certainly not to govern and everyone's best interest. i think he has lost a lot of faith. and i think down the line he might have great problems if he has to tell people to lock down again in winter if we get a second wave when he is trying to convince people that going out and restarting the economy is something we have a public duty to do. he has lost the ability to sell, he has always been ability to sell, he has always been a salesman and showman, and he has abandoned that at the moment, it is not working any more.
10:39 pm 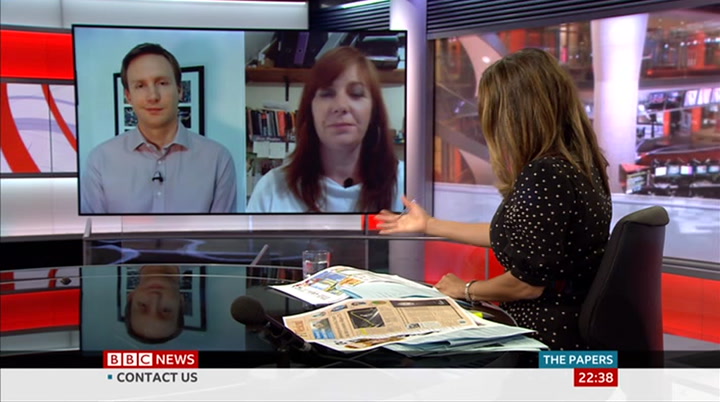 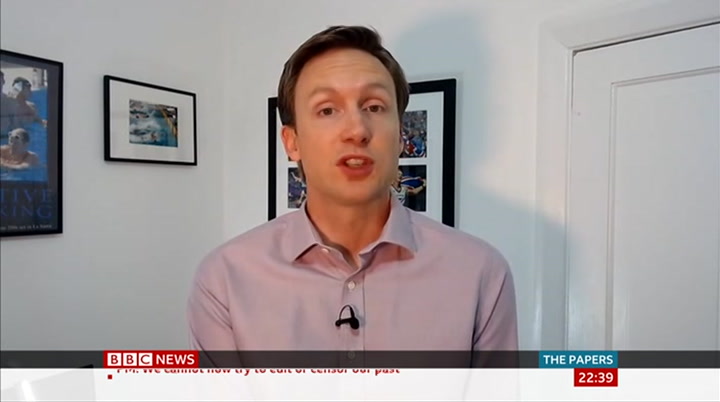 happen, those kind of changes will only come around as a result of actual changes on the ground with the virus. that means antibody testing, that perhaps means some sort of immediate certificate or passport, and it means a vaccine the difficulty of the government has is that those are many months and perhaps it years away. the british economy does not have months and years to wait. you're also going to hear these job losses, we talking about them a few minutes ago, new figures out on monday with businesses likely to shed staff before they had to start footing the bill. the prime minister is when to have a tough balancing act, out in a shopping centre trying to sell the idea that everyone needs to get out there but he is also going to have to ta ke there but he is also going to have to take a lot of questions about what the government is going to do on going to help people who are going to lose theirjobs. they have the furlough scheme coming to an end, anyone who had a three month mortgage holiday, that is not coming to an end. money is going to start
10:41 pm 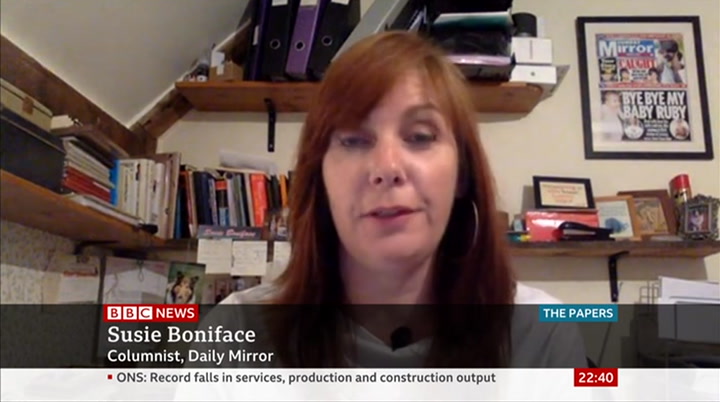 getting very tight for a lot of families. there is going to be fear of losing money even if you are not actually losing yourjob or losing your cash. it says in the times article only 36% of england feel safe leaving their homes at the moment, two thirds of people who don't feel safe. they are not one to p0p don't feel safe. they are not one to pop down to the nearest market when it opens. it says a fifth of people, 20%, will never close shop in the high street ever again. what you need to be thinking about here or as some suggested to me is to have a campaign to shop local, to use and support your small local businesses because they are the ones that need our support the most. big chains, some of which i will not name any who use international tax structures so that they don't have as much of a presence tax wise in this country as they should do, are not the ones we should be going out and giving our business to after this. we need to support our local businesses, the small businesses, they are the
10:42 pm 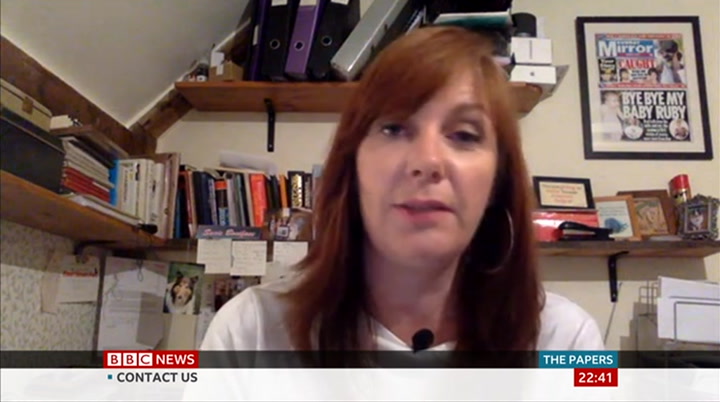 backbone of our country, and they had been there to provide for their customers who have set up delivery rounds, helped local people they know are shooting and things like that. your small local shop needs you sort of campaign. people on social media are really supporting their local shops and sharing which ones are open and which ones are delivering. let's have a look at another story now in the front of the times and also the daily mail, the boarded—up statue of winston churchill in westminster which is causing a lot of consternation, not the lease with the man who consider him his own personal hero boris johnson the man who consider him his own personal hero borisjohnson who has described the act of vandalism against the statue as absurd and shameful. joe, what is your view on boarding up the statues to protect them? is an extraordinarily difficult position to be and once again. the public supports the principle of the type of objections
10:43 pm 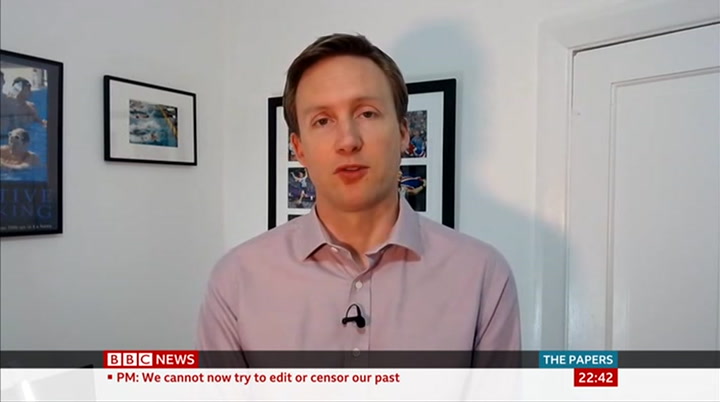 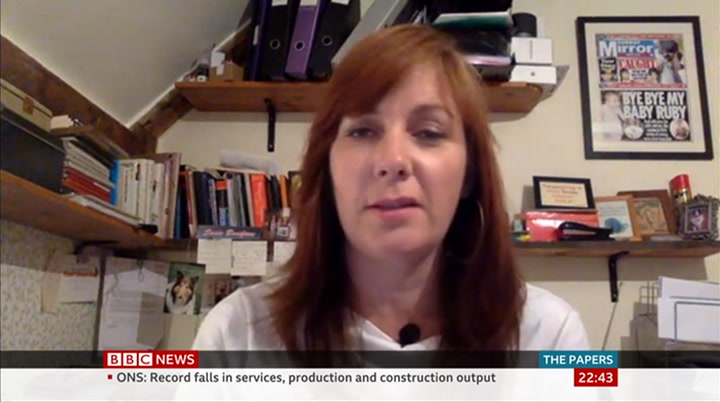 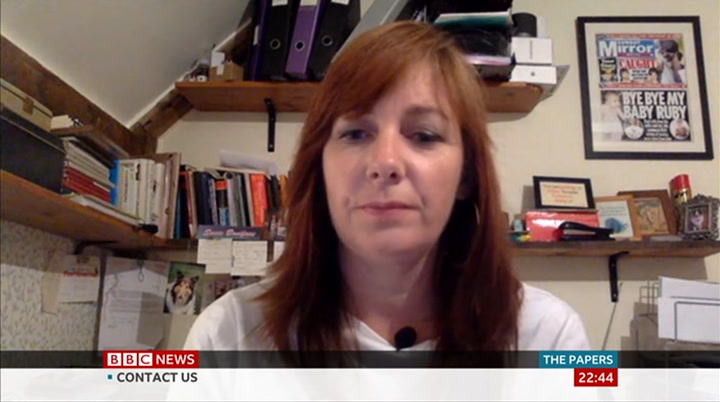