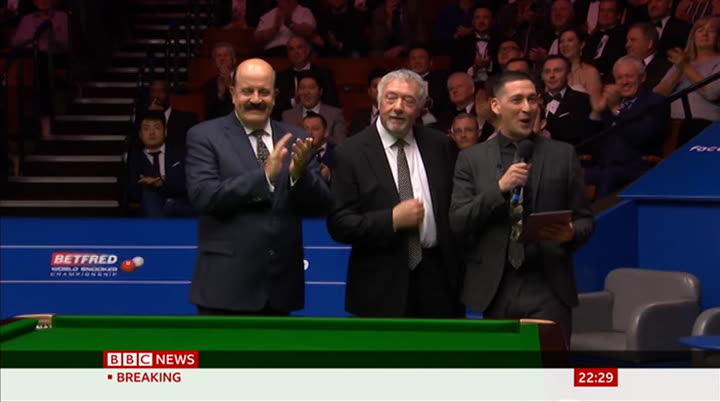 he remained a popularfigure in world snooker long after his retirement as a player. his voice on commentary was part of the texture of the tv coverage — for example, when steve davis defied time to win this match in 2010, thorne described it. steve davis has somehow, and i say somehow, rolled back the years and beat one of the all—time greats. backstage at the championship, a favourite companion for thorne was mark selby. both men of leicester, they revelled in the city's football success. selby grew up watching willie thorne and he became world snooker champion. i used to look at him and he used to inspire me and taught me a lot from a young age and obviously, if it wasn't for willie, i suppose i wouldn't be where i am today. obviously i've learnt a lot from him from practising with him, him giving me tips along the way and stuff. he had a massive impact on my career, that's for sure. willie thorne‘s flaws were never far from view. his struggles with gambling were well known and widely reported
10:31 pm 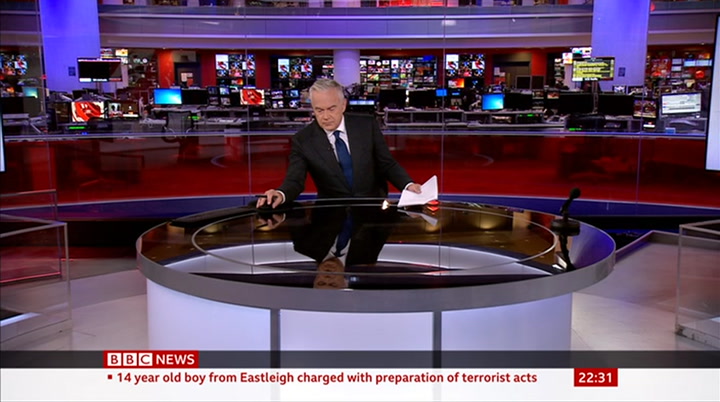 but, throughout it all, willie thorne remained one of the most endearing figures from snooker‘s golden era. today's tributes to the great wt, snooker‘s willie thorne, who's died at the age of 66. that's it. now on bbc one, time for the news where you are. have a very good night.
10:32 pm 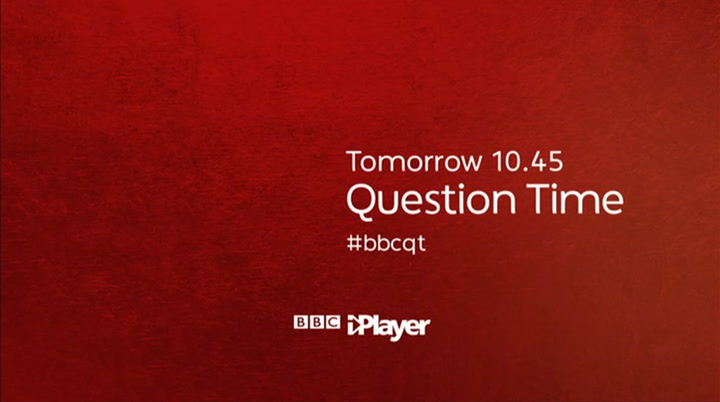 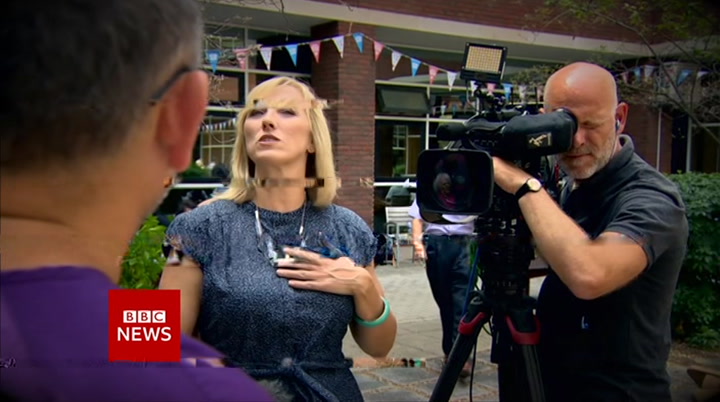 welcomeﬁb—benewt hello to viewers in the uk who are joining viewers around the world. it's now time for us to take a first look at the national and international front pages in the papers. hello and welcome to our look ahead to what the papers will be bringing us tomorrow. we'rejoined by lance price, a political commentator & the former labour pa rty‘s director of communications, and anna isaac, from the wall streetjournal. so lets take a look at tomorrow's front pages, starting with prince charles is warning of the "potentially devastating" impact of coronavirus on younger generations —
10:34 pm 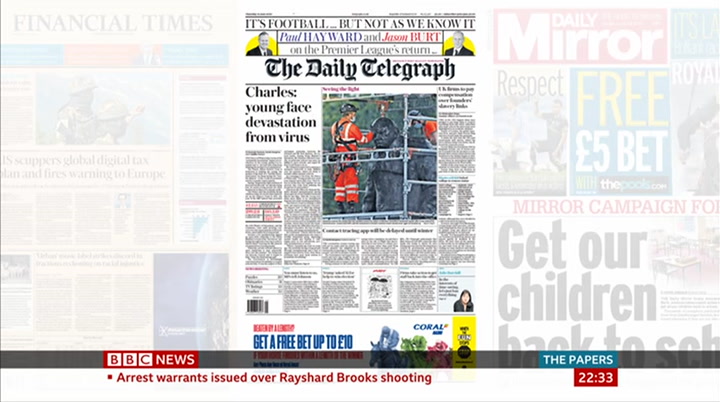 that's the lead story for the telegraph. there's an urgent call in the mirror, for the uk prime minister to get all children back to school — or risk ruining their education. doctors are also calling on borisjohnson to reopen schools — in an open letter signed by more than 1,600 paediatricians. that's on the front page of the times. the new york times reports on the introduction of new contact tracing apps — and the debate they spark about safeguarding privacy rights. the guardian leads on the news that 0riel college in oxford has announced that it wants to take down the controversial statue of cecil rhodes. in singapore, a senior minister has laid out steps to ensure social cohesion, in the face of the covid crisis. that's on the front page of the straits times. according to the i, the "triple lock" pledge on pensions in the uk is at risk, due to the large increase in spending during the pandemic. and the financial times reports that the us has upended global digital tax plans, after pulling out of talks with europe.
10:35 pm

so let's begin. some of the front pages that we have so some of the front pages that we have so far. let's start off with the new york times. in the story bubbling under that we have been reporting across the bbc. the tensions rising between china and india. they have now turned lethal. lance, just remind us as to what these tensions give these clashes are about. there's been tension in that part of the world for at least 50 years. talking about this border between india and china. just as our intentions between india and pakistan which erupts from time to time. and it has similar problems.
10:36 pm 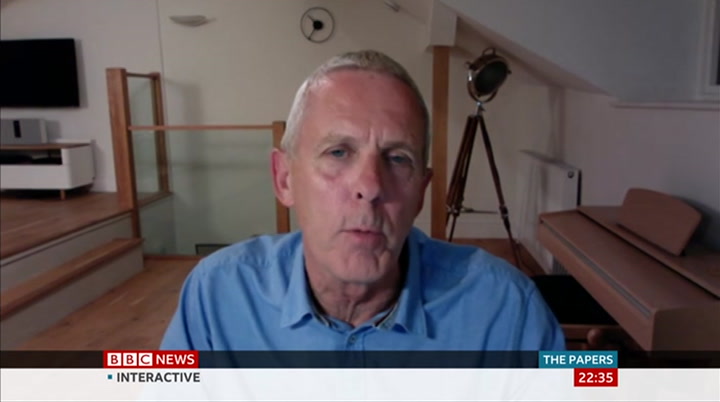 it seems that for reasons that are not entirely clear to anybody it has gotten progressively worse. the chinese have been moving troops to the border and the indians have done the border and the indians have done the same. and it suddenly it escalated into what was actually a massive brawl by the sound of it. they stuck to the rules because they've got quite strict rules in place to prevent it turning into a shooting war, but nobody it seems resorted to firearms for the information that's come out so far but they were fighting each other literally fighting each other with fists, clubs, rocks and bits of wood and nails that are sticking out of them it must have been one hell of a fight because nearly 20 indian soldiers lost their lives. absolutely. the financial times has that talking about pushing for a column in this border row. as lance
10:37 pm

was saying, they are not supposed to be using weapons as such, but fighting did flare up on monday and those tensions running high according to the financial times. there's been statements from both sides from officials trying to say we are not seeking escalation in this matter and are going to look into it, we are not trying to escalate this. one of the reasons is it's quite shocking to have such important powers and having the worst conflict on their board and more than 40 years. we talk about escalation here we talk about how serious they could become. how quickly this fight broke out there's beena quickly this fight broke out there's been a real fast ever to say we are going to look into this and let's try and de—escalated it and calmly approach this matter. it may be the
10:38 pm 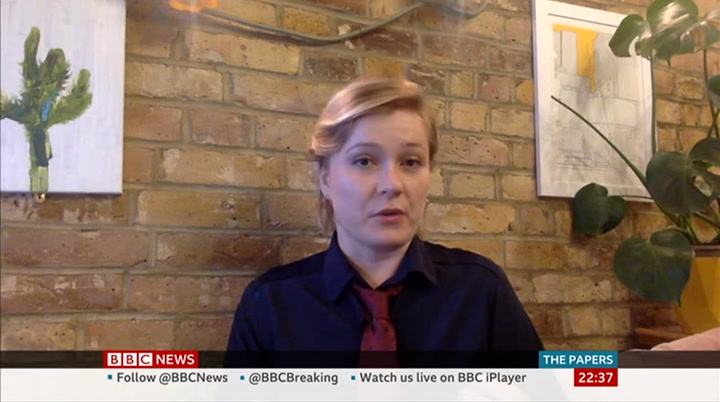 sta kes approach this matter. it may be the sta ke s of approach this matter. it may be the stakes of them are going to be so high on the other side they are making this concerted effort. with that with the himalayas he got a natural border there and yet neither power wanting particularly to further escalate the situation and yet we have got the situation where we've got fisticuffs across the border of the himalayas. it does seem extraordinary looking in from the outside because it's a very sparsely populated area. and you would think, does it really matter if the border is a little bit this way or that way? but that's applying logic to a situation when you've got to very fiercely nationalistic countries anyway but led by nationalistic leaders at the moment who would not dream because of their domestic political situations to be seen to be backing down so you have
10:39 pm 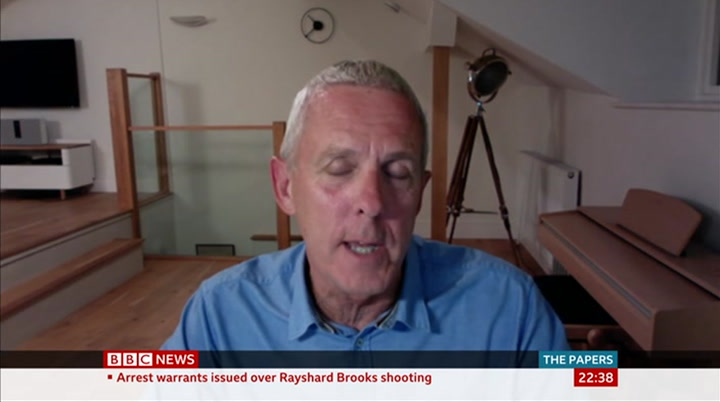 troops on the borders who clearly feel that they have a job to do to defend the borderfrom both sides but you also have the political leadership that has sent out very strong signals they not going to back down although they don't want it to escalate. the history of these things whether it's the border of china or with pakistan as we were talking about earlier has always been that there's these flare—ups and then it quiets down again. these are all nuclear powers, the potential for it to get very nasty. of course is always there but we have to hope that this time as in previous occasions they will back away from that. yes indeed. something we are continuing to monitor. let's change the daily mirror. the mirror has set up a campaign to get children back to school. and of course this is our schools that are potentially of course open for key workers better close for most children and
10:40 pm 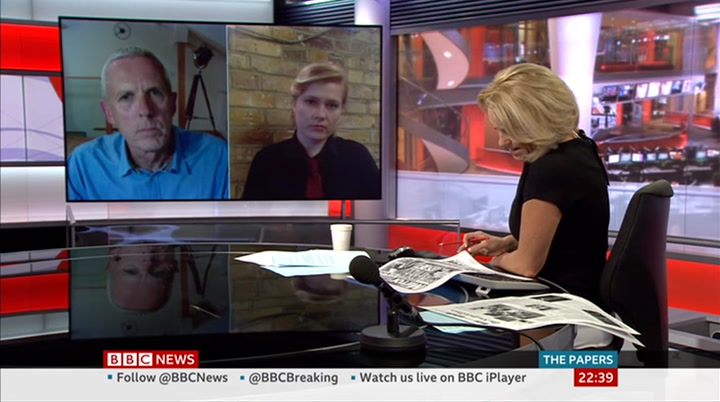 hopefully reopening in september. the mirror now backing or setting of this campaign for kids to pick daily it back to schools and urging boris johnson to take action. most children will have spent more than 12 weeks away from school now what we are traditionally going to be a very big—time in the school year getting this qualifications you need to progress forward out of school and into the workplace or further education. and more and more people are saying what about the impact on their well—being? are saying what about the impact on their well— being? what about are saying what about the impact on their well—being? what about the children that were not identified as vulnerable before coded it and since we've had this 12 week period where a lot of people have lost work and there's been a huge spike in domestic violence, they are now saying we have to start having a conversation about the bigger welfare ramifications of having so many children out of school. we are seeing this campaign in the mirror of the papers moving in on the story as well really upping the pressure
10:41 pm

on the leadership in england. he also got a very different situation in scotland at the moment. it had a debate today about when scottish schools would open and that's looking like it will have them in a much more rapid timetable as august and not more school attendance putting to nicola sturgeon today. and picking up on this talk of children going back to school and being scarred for life according to 1600 pediatricians, so no doctors calling a boris johnson 1600 pediatricians, so no doctors calling a borisjohnson to reopen school for all children. the pressure is getting quite intense on borisjohnson pressure is getting quite intense on boris johnson and his pressure is getting quite intense on borisjohnson and his government to get schools reopened. it has become political and you have pediatricians that i don't think they have ever written a letter like this before but it's also gotten political, we saw exchanges at prime minister's questions in the house of commons
10:42 pm 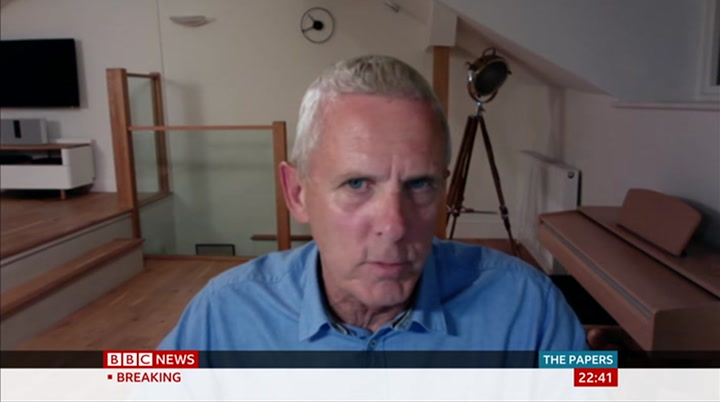 today with the prime minister seeking to somehow blame the labour opposition for not putting enough support behind the idea of getting the schools open but critics have said that while they were pouring millions into building new hospitals, many of which were never needed or temporary hospitals to deal with the crisis, there was nothing like the same sort of planning and expenditure to get educational establishments ready to deal with the extra numbers. i think people are scrambling around a bit 110w. people are scrambling around a bit now. a few small schemes around about perhaps private schools and those in the private sector. 0pening up those in the private sector. 0pening up some of their spaces and more online tuition over the summer, and perhaps even some money made available for personal tuition for students. but it does look again as the criticism leveled at the government many times, look again as if they are coming at it rather
10:43 pm

journal, the paper you are writing for also having this story. one of the snippets that's come out of it is that donald trump did not care about the internment camps which of course in terms of human rights issues in china's history on that will be of huge concern. yes, the picture painted by the book is certainly one that raises big questions about how attached president trump might be, and this isjohn bolton's view president trump might be, and this is john bolton's view of course. 0ne person. but how his approach to foreign policy might be from an ethical perspective of being consistently morally engaged and informing us the point about that is particularly shocking because the evidence that's emerged from china is one of very, very severe conditions for the people both in internment camps and also
left
right
Borrow Program
tv