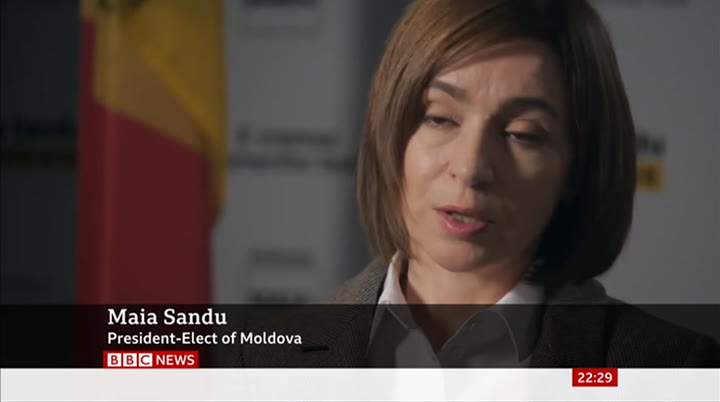 our objective is to get closer to the eu, and hopefully one day to become a member of the european union. but will russia let that happen, will russia let your country join the eu? it's our... it's our choice. in the end, it's the sovereign decision of our country. it's the decision of the republic of moldova. moscow can still find ways of slowing down change in its own backyard, and yet russia, too, is changing. it's having to. it's on a journey from empire to nation state. for a country with a superpower past, that is a painful transition. steve rosenberg, bbc news, moscow. and finally, after months of wrangling and negotiations, the premier league and english football league have agreed a multi—million pound rescue package for clubs struggling because of the pandemic.
10:31 pm 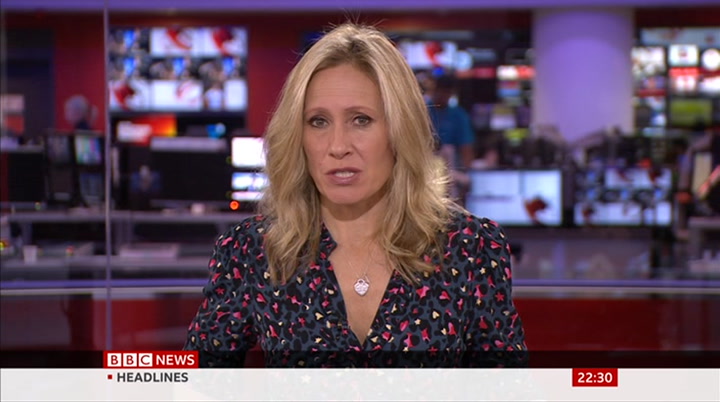 they've been forced to play their matches behind closed doors, and they've suffered badly. our sports editor dan roan has more. after months of wrangling, it had gone into extra time but today, finally, the result many in the game were hoping for. commentator: a perfect start to proceedings. the premier league agreed an improved funding rescue package that means a £250 million bailout for clubs like these in the cash—strapped english football league. under the terms of the deal, the top flight have agreed to pay up to £15 million to help the efl secure a £200 million loan for championship clubs, capped at £8 million per club. a £50 million rescue package for leagues one and two is split, £30 million as an immediate grant, with a further £20 million in what's called a monitored grant that clubs can apply for based on need. here at league one rochdale, they've had no fans since march and, being in tier 3, are yet to be allowed to reopen their turnstiles. today's deal means they'll receive a minimum payment of £375,000.
10:32 pm 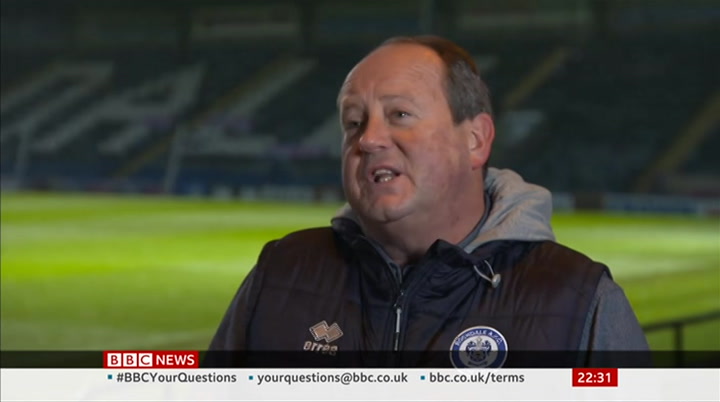 for a club like rochdale, it probably is less than two months of our normal regular outgoings. so it's a great thing to have, you know, i'm not appearing to be ungrateful but on its own, it won't be enough to ensure the survival of all of the clubs in league 1 and league 2. chelsea were the biggest spenders this summer in a transfer window that saw premier league clubs splash out more than £1 billion. the government insisted it proved that the top of the game was wealthy enough to support the lower leagues through the pandemic, and tonight hailed the agreement. fa ns ca n ta ke comfort now that their clubs are secure and they can also take comfort with the fact that in some tiers, they can start seeing the game being played again. we can move beyond the worries about whether the game is safe, through to actually starting the road to recovery. in a week that's already seen fans return to some grounds nine months after football was forced behind closed doors, this is more positive news for clubs amid an unprecedented financial crisis.
10:33 pm 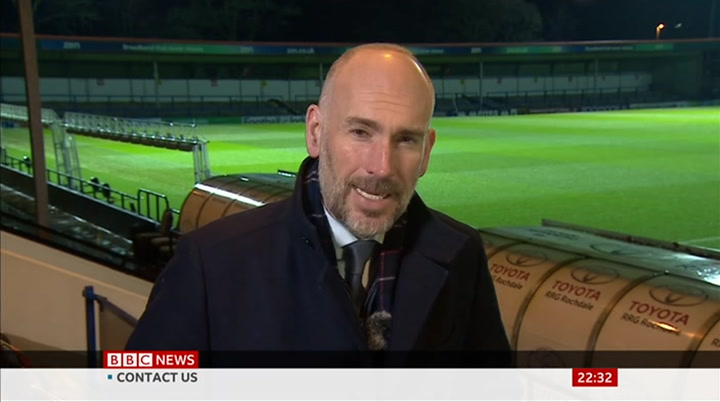 this saga has raised big questions about the premier league's responsibility for the rest of the game. today won't solve everything, but it is a rare moment of unity in a fractured sport. dan roan, bbc news, rochdale. that's it. now on bbc one, time for the news where you are. have a very good night. this is bbc news, the headlines. hello and welcome to our look ahead to what the the papers will be bringing us tomorrow. joining me are the whitehall correspondent for the financial times, sebastian payne and deputy political editor at the guardian, jessica elgot. lovely to see you both, welcome. before we get started, let's have a look at the front pages. the coronavirus vaccine arrives in the uk —
10:34 pm

the i reports the world's first doses will be distributed to 53 vaccination hubs this weekend to start rolling outjabs on tuesday. the guardian's front page looks into the change in the coronavirus vaccine priority list — nhs staff will no longer get the jab first, instead, hospitals will begin by immunising care home staff and inpatients and outpatients over 80. the metro accuses government minister gavin williamson of being "boastful" in an interview made earlier today, in which he said the uk got the covid vaccine first because "we're a much better country" than everyone else. away from the vaccine and the financial times reports negotiations on a trade deal between britain and the eu are hanging in the balance as the deadline looms. the front page of the telegraph says negotiations between borisjohnson and emmanuel macron are heading for a showdown this weekend over french access to fish in british waters.
10:35 pm 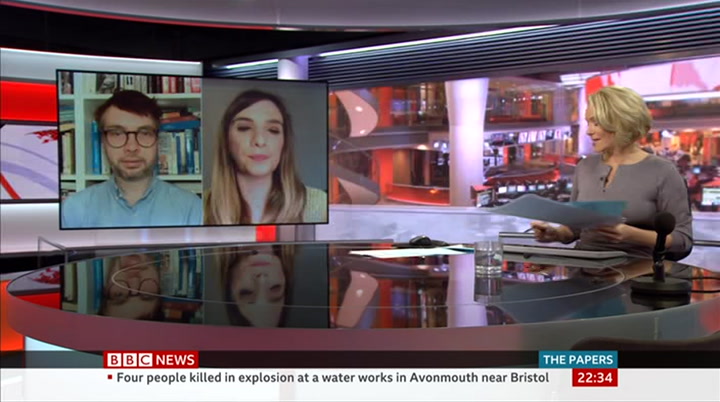 lovely to see you both, thank you both forjoining us tonight. let us start with the vaccine arriving in the uk already. jessica, this is the first consignment that has gone to a central hub, undisclosed location, very secretive given how valuable this is. in theory, distribution from next week. yes, apparently mi5 advised the government not to disclose the exact location of where it is being kept. yes, it will be distributed around the uk immediately. it feels amazing it is happening this fast. i noticed on twitter before, there are some interviews with residents of care homes who expect to get the job in
10:36 pm 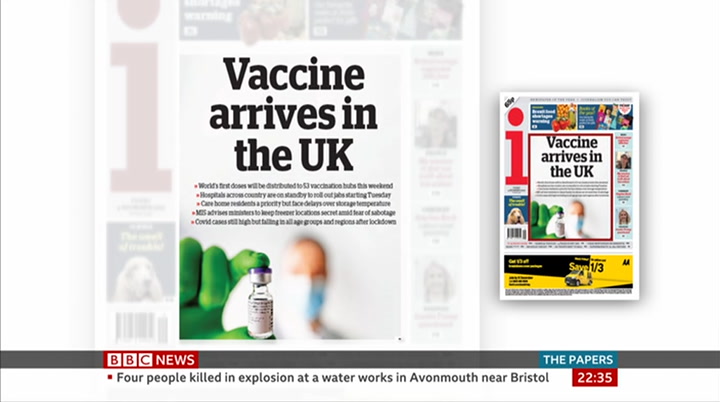 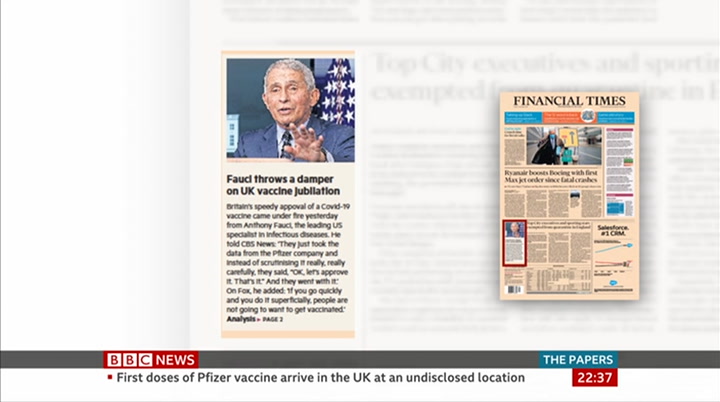 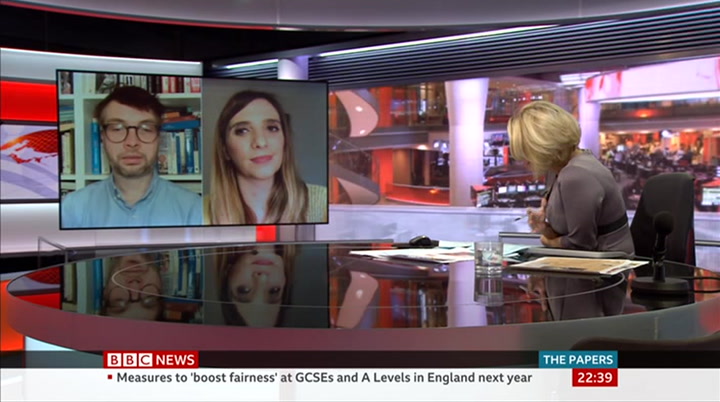 although course that had that effect. i am sure you are both watching the news channel at nine o'clock because it is exactly that, he came on live and wanted to come on to speak to people in the uk and just clarify, he said he has full confidence in the mhra procedures. he said he did not express himself as well as issues of earlier and his words were taken out of context, as you alluded to. he was perhaps a bit sloppy in the terminology used and did not want to imply sloppiness and rollback his comments about the speed of the uk vaccine in the way it was approved. i think that is really important, not least given how there are people that are concerned about taking a vaccine that has been so quickly brought onto the market. i don't think there
10:40 pm 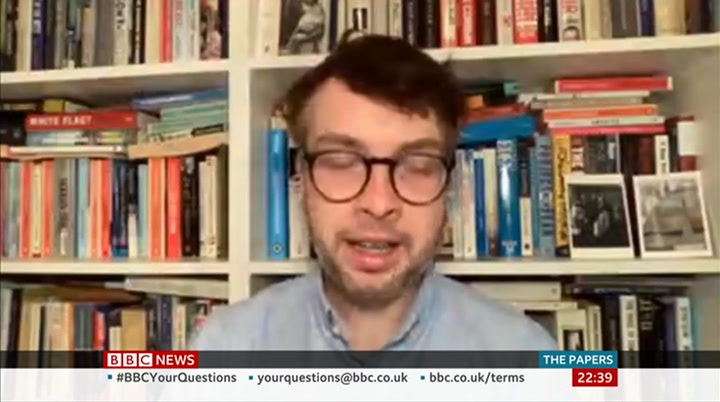 is actually that much concern about being brought early onto the market because the mhra is a globally respected regulator and it moved quickly and effectively here. until dr fauci's ill advised comment no one doubted the speed of it and i can understand why he wanted to correct the record because the us is likely to approve the pfizer vaccine in the coming weeks. we expect that to be more towards the end of december. he is criticising the uk process and then uprooted himself, that raises the question of why do in first place? 0bviously everyone is under terrific political pressure, the trump administration and the american fda, the tom administration has been trying to force them to get approval as quickly as possible. the mhra here
10:41 pm 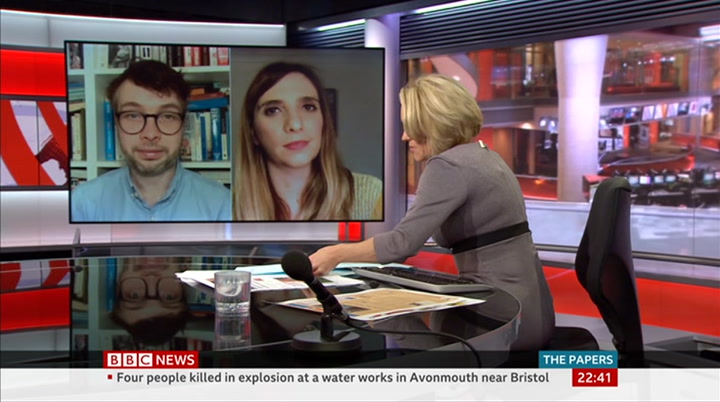 is facing the same thing. but fundamentally, no one has criticised the fundamentals of the uk approval and this is a good thing. the focus of the entire world has to be building calls —— my confidence because we have already seen mad conspiracy theories doing the round and this will be the biggest way of defeating coronavirus so everyone has to be careful with their words. he said it came out wrong, it was not the way i meant to be. he is a busy man but he did come onto explain what he really wanted to mean. jessica, your paper, the guardian, is talking about the priority list of who will receive the vaccine first. we have always talked about the importance about getting it to the elderly and the nhs front line staff but what has changed here? i think the difficulty
10:42 pm

is that although they believe the 800,000 doses of the first consignment for the uk from belgium may be the only batch we receive for some time so it has to be done in a way that really prioritises the most at risk so there has been this rethink about who should be given priority. initially, nhs staff are getting the vaccination first, because they are highly at—risk but also because it is easier to vaccinate them in settings like hospitals where they can keep it at the -70 hospitals where they can keep it at the —70 degrees and needs to be kept at but now this rethink is happening and hospitals, instead of immunising staff will immunise patients and outpatients over 80. that will be a disappointment to some nhs staff who work in high—risk settings. 0ur reporter says quite a few of them
10:43 pm 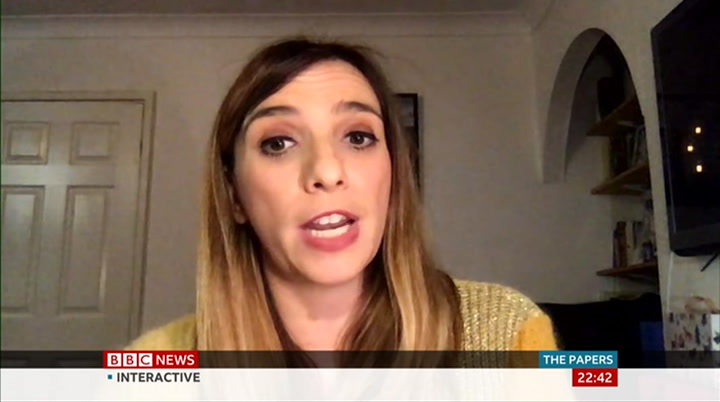 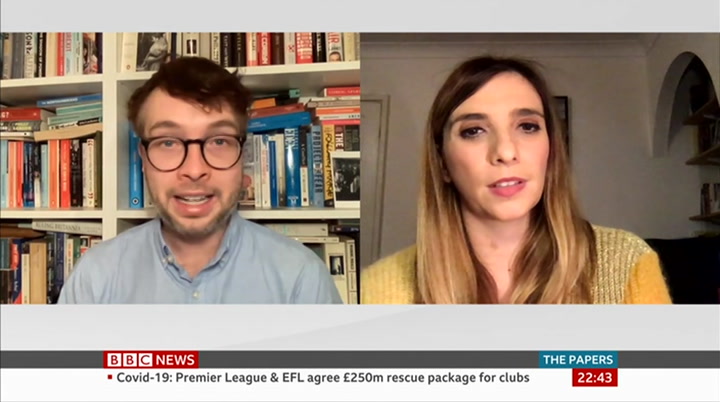 what chicken due to protect the nhs the most. 0n what chicken due to protect the nhs the most. on one side, you need as many nhs staff as possible working and not having to isolate with coronavirus and on the other hand, you have the elderly part of the population and all the research shows that h is the single biggest contributing factor to getting seriously ill with coronavirus. but the focus within government is looking forward to the next vaccine, the oxford vaccine which could be approved next week or the coming weeks. vaccine is much cheaper, £3 compared to $39 for the pfizer vaccine. it is easier to distribute, it can go on a normal fridge, doesn't need to be kept at —70. the government is balancing all these factors. this vaccine will focus on the most vulnerable and hopefully when the oxford vaccine comes online
10:45 pm

it will be easy to distribute to nhs staff. i have a lot of sympathy for the government, these are difficult calculations to work with but the key thing is to protect lives and make sure the nhs is ready. the 2nd of january is always known as the worst day in the nhs year because thatis worst day in the nhs year because that is the worst day for pressure from flu and we need to think about covid—19 as well so that is going into all the calculations at the moment and i into all the calculations at the momentand i imagine into all the calculations at the moment and i imagine there will be chopping and changing when the government tries to figure out the best way to use the supplies they have. i am so relieved i don't have to make those decisions, the burden of handling all that is above my brain capacity. let us leave coronavirus for the moment and look it the daily telegraph. we have been hearing about these negotiations. every cliche thrown at it, not much time left, negotiations we heard earlier on today from
left
right
Borrow Program
tv