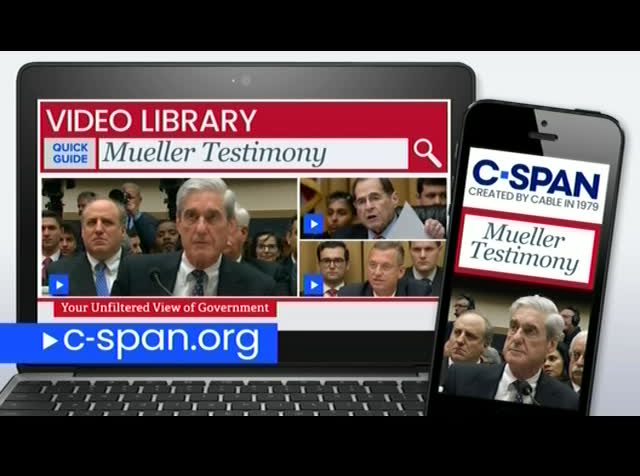 once the hearings on demand. the video is searchable by speaker with key points highlighted. >> c-span's "washington journal", live every day with new policy issues that attract you. coming up thursday morning, you open bones and take your comments and reaction to his testimony wednesday. on his report of russian interference and the 2016 presidential election. join the conversation all morning with your phone calls, facebook comments and tweets. make sure to watch c-span's "washington journal" of at 7:00 a.m. eastern thursday morning. >> trump offered his first reaction to robert mueller's testimony before congress while departing the white house fundraiser in west virginia.
10:39 pm 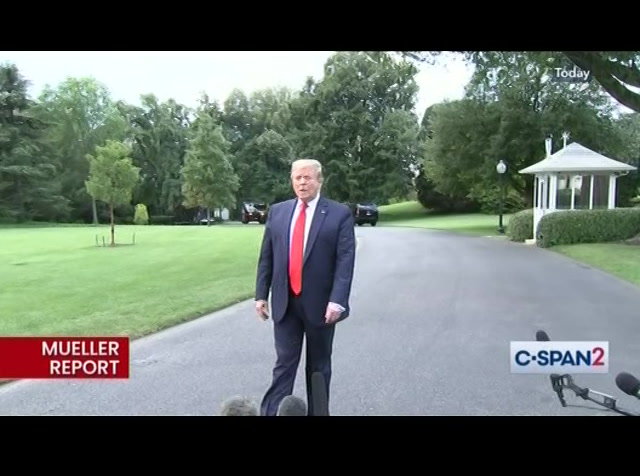 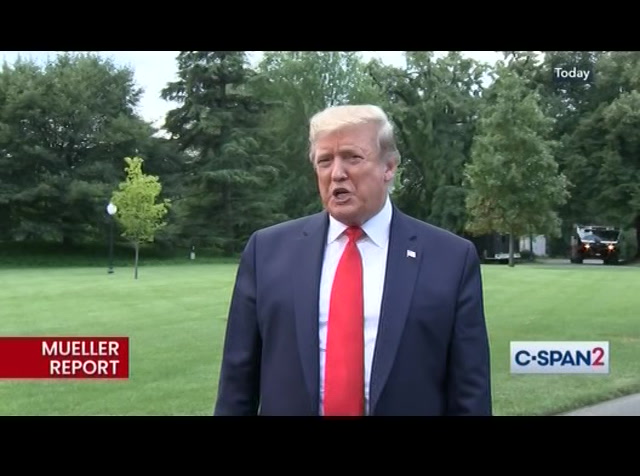 on for a long time. pretty much from the time i came down. it's a disgrace what happened. i think today proved a lot to everybody. some of my biggest opponents wrote things today i wouldn't have believed they would have written. this is a very bad thing for our country. despite everything, it's been an incredible two and half years for our country. our president needs, we've done a great job. the most number of people ever working in the history of our country right now. almost 160 billion our military has been rebuilt and getting even stronger. we've done a great job and redundant under this terrible
10:41 pm 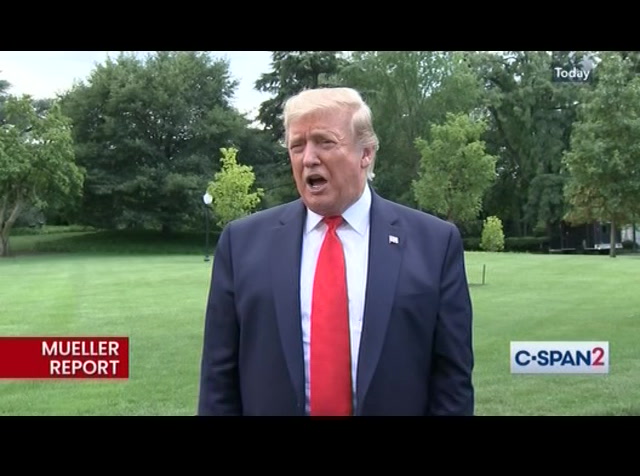 phone cloud. they should be ashamed of themselves. schiff and nadler and schumer and pelosi, every one of them knew it was phone stuff. look at the polls, they show it more than anything else. i've had my best ones, people seek what's gone on in our country. i've been going through it for three years. it's all nonsense. this was a very big day for our country. this was a big day for the republican party and you could say it was a great day for me but i don't even like to say that. i appreciate the incredible words today on television.
10:42 pm 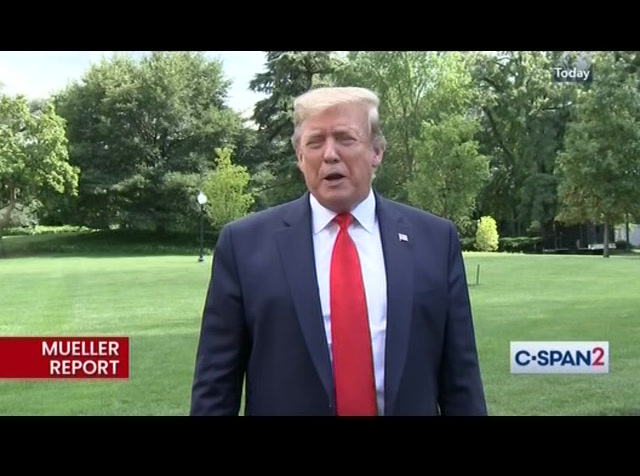 republicans who defended something very powerful, very important. they were really defending our country. they've been warriors for a long time. everybody knew it was a hoax, especially democrats. i wish we could see a fly in the wall. they'd be laughing and smiling and say, can you believe we're getting away with this? >> [inaudible question]. >> he didn't have the right to exonerate. people mention exoneration, that was something, he never had the
10:43 pm

right to exonerate. it was covered very well by turner and put to a conclusion. if you look at not only the report, look at not what he said but what he was forced to say. we've had a couple of cases wits where they ask our representatives, please don't come in tonight. we won't be doing much. the reason they are not, because it is over. it was a hoax like everything else.
10:44 pm 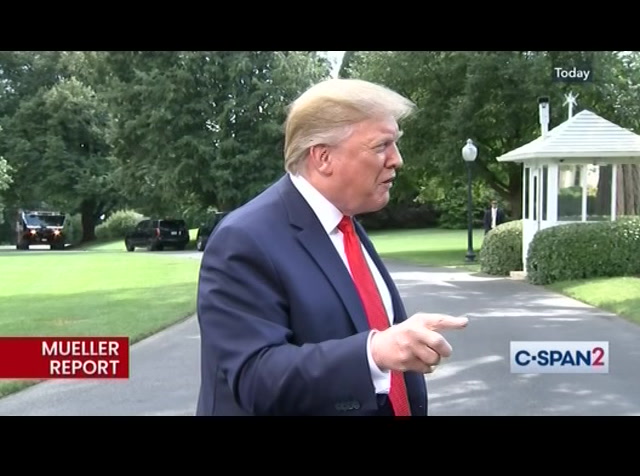 all the problems having to do with crime or the biggest hoax of all. it was a witchhunt. when you start robert mueller's, he did recap, he did a correction later on in the afternoon. your fake news. the fact that you even asked that question, your fake news. he corrected himself in the afternoon. you know that just as well as anybody. if you look at the report, you look at what they did, the things he didn't even know about, he didn't even know what was going on. in the end, he probably came
10:45 pm

through for himself. the performance was not very good. what he showed more than anything else, his whole thing has been three years of embarrassment and a waste of time for our country. the democrats thought they could win an election like this, i think they hurt themselves very badly. >> [inaudible question] >> i don't know. whether or not he did, wouldn't matter to me. we've done nothing wrong. it was always a very important meeting. it is important to fake news. let me tell you, it's not what
10:46 pm 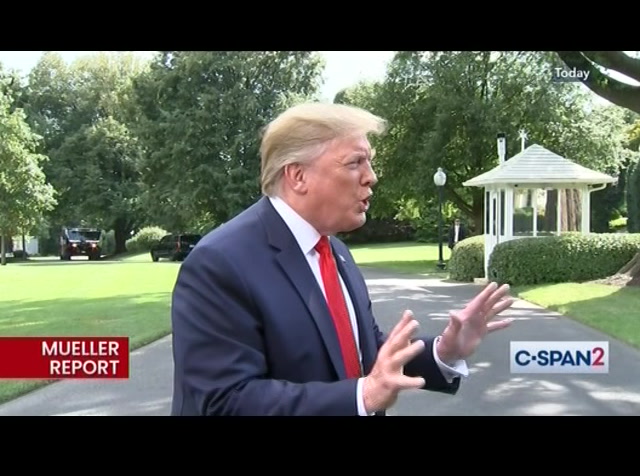 he said. read his correction. if you read his correction, you will find out. that's why people don't deal with you. you are not an honest reporter. >> and out of the question [inaudible question] >> things are devastating. their party is in shambles right now. they've got this leading their parties, they are a mess. even you look at so many of the people that were the most outspoken and they say this was a devastating day to the
10:47 pm 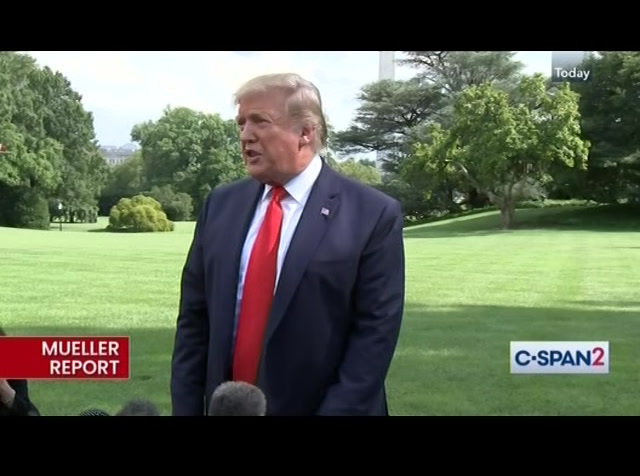 democrats, everybody else knows it, this was a devastating day for the democrats. >> [inaudible question] >> very dumb and unfair question. if you look at it, he made his decision based on the facts, not based on the rules. the democrats had nothing. now they have less than nothing. i think they will boost of 2020 election, including congressional states because of the path they chose. who knows where it goes. i hear they are giving up. i know them too well, they'll never give up.
10:48 pm 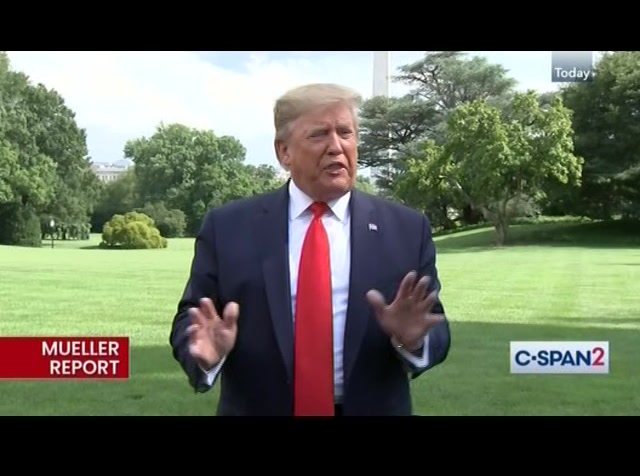 this whole thing has been collusion. collusion with the media. this has been a disaster for the democrats. i think we will win bigger than ever. i'm going to west virginia, one of the great states, look at percentage, i think it's number one or two in the country. nobody would have believed that. we had a big case today. we want the asylum case in washington, you should be asking about that. that is the real deal. i can't believe how nice you are. [inaudible] >> we did nothing wrong. nothing was done wrong.
10:49 pm 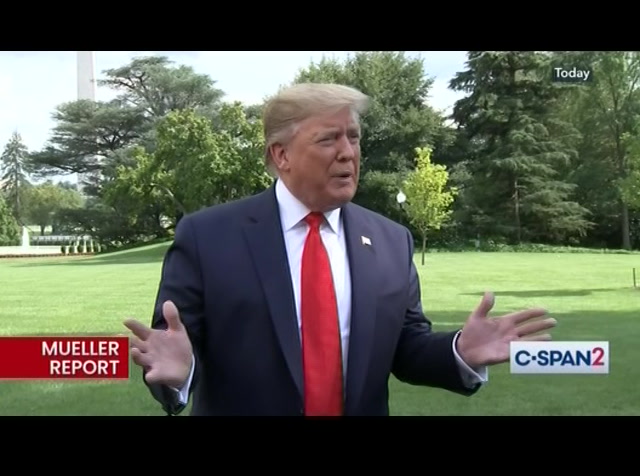 if you look at it today, nothing was done wrong. you will find a lot that was done very wrong but that is done now. that has to do with the other side. that has to do with the sinkhole. investigate the investigators. let's see what happens. >> [inaudible question] >> i think robert mueller did a horrible job both today and with respect to the investigation but it, in all fairness, he had nothing to work with. you can be a builder but if they don't give you the right materials, you won't build a very good building. he had no materials, nothing to work with.
10:50 pm 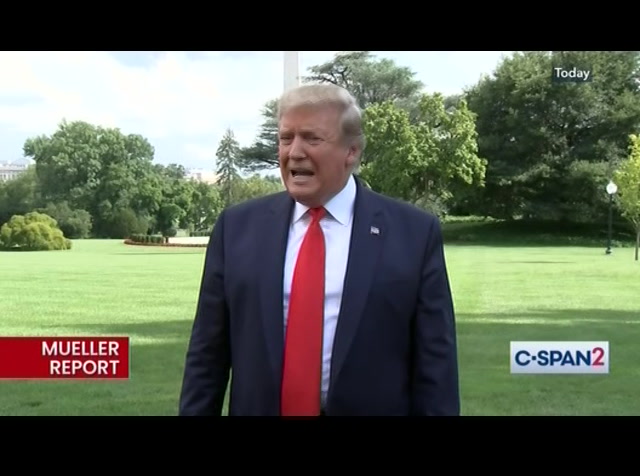 so obviously he did very poorly today. i don't think anybody would say he did well. i will tell you, the two most nauseating, they've gone way down. they said this was a really bad day for the democrats. robert mueller did a poor job but they had nothing to work with. >> [inaudible question] >> i know how he ruined people's lives. they didn't remember a date or something very minor. he ruined people's lives. the democrats destroyed their lives. they went bankrupt because they couldn't afford the legal people fees. all they had to do, if i made a
10:51 pm 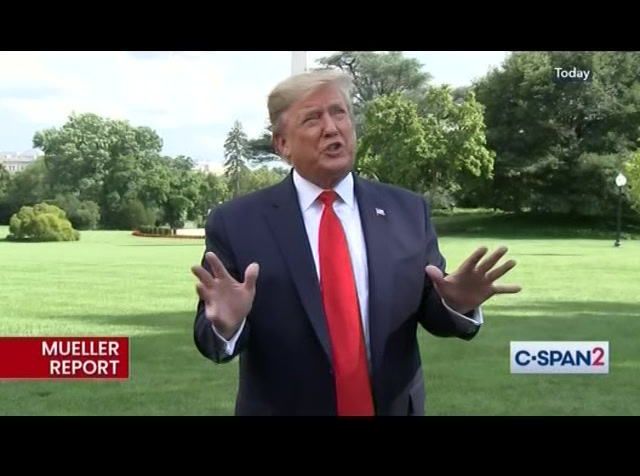 mistake, i was talking to the media. it was a little overcast. i've seen what they've done to people. i've seen how they destroy people. what they've done to people, i did the right thing. >> mueller had no material. he did a horrible job. it didn't matter. he has no materials. i read the paper and the press and the internet, you see what's
10:52 pm 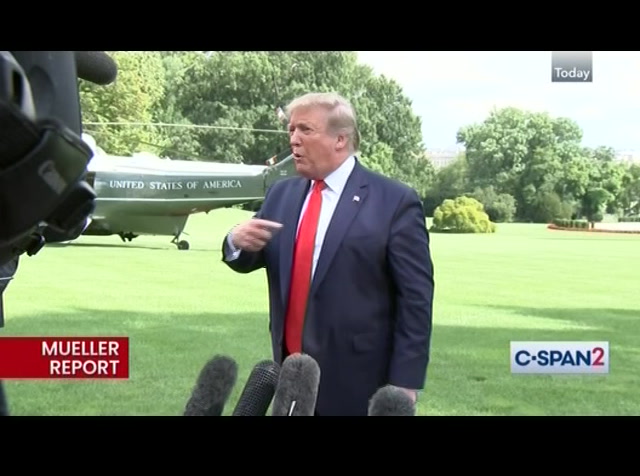 going on the internet, this was one of the worst performances in the history of our country. you know very well. i don't think anybody could have done it, he had no material. it was an illegal overthrow. >> [inaudible question] >> the asylum -- the asylum is a very big ruling. we appreciate it. we respect the courts very much. the numbers are way down in the quarter. mexico has now 22000 soldiers and they mean business.
10:53 pm 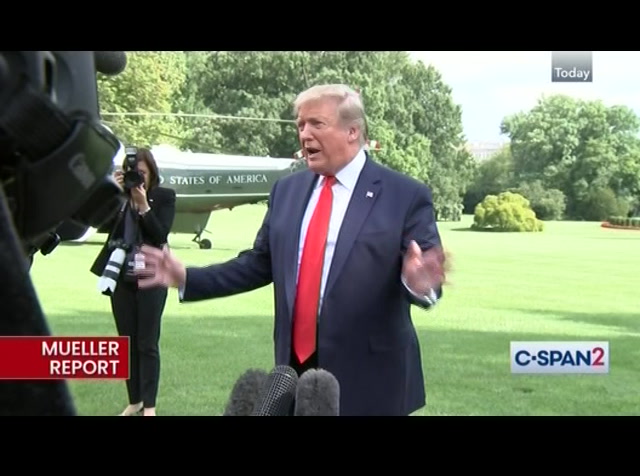 they know what happens. it's also good for mexico because they've been running all of the orders for years and years. 21000 soldiers. this is tremendous. >> [inaudible question] >> all of a sudden, they backed off. they said it was the supreme court. i don't believe that. they said it was the reason they wanted it. they are willing to do that. i've already cut off payment. el salvador and guatemala, $500
10:54 pm 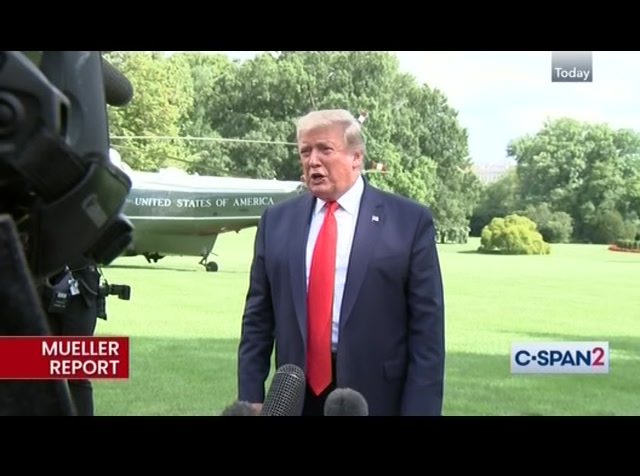 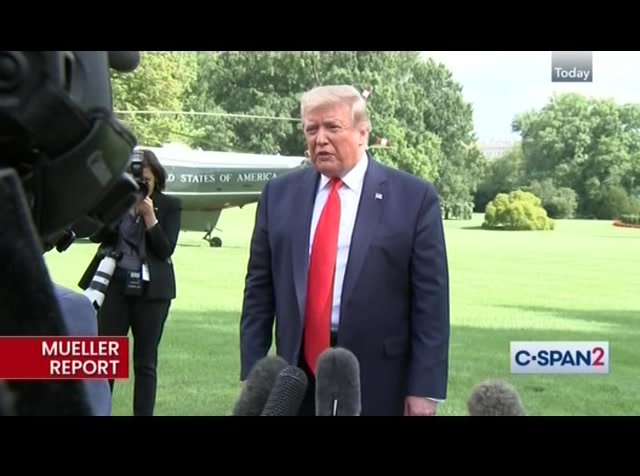 untruthful? his eight. he got caught where he lost the supreme court nine to nothing. they were very untruthful. they put him in a bad position. if you were ever truthful -- >> [inaudible question] >> i am very happy with it. >> what happened was, it was a disgrace. they had a lot of texts, and then you get too much into that
10:56 pm 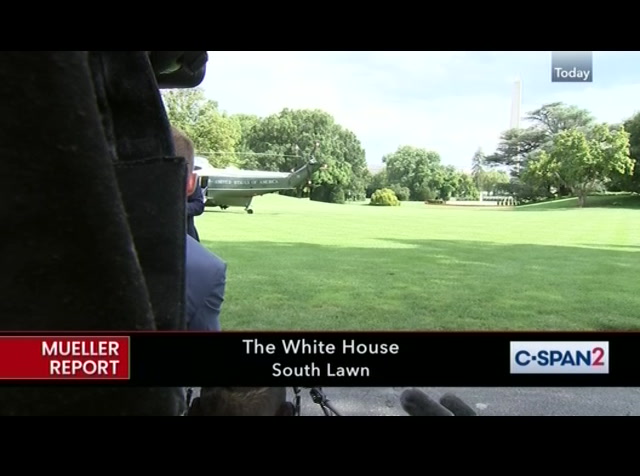 and then he didn't know anything. they were the ones with an insurance policy. what mueller did, they went back and forth. that is a silly problem. [inaudible] we take down the escalator. this is a really good place.
10:57 pm 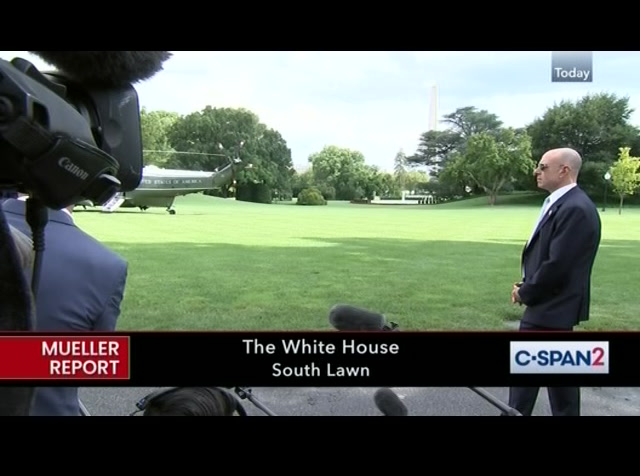 [inaudible] [inaudible] >> presidential leadership taken between 202,017. seventeen to 23rd place. makes the most dramatic rise of all the president going from the 33rd to the 22nd spot. raise your present favorite president ranking?
10:58 pm 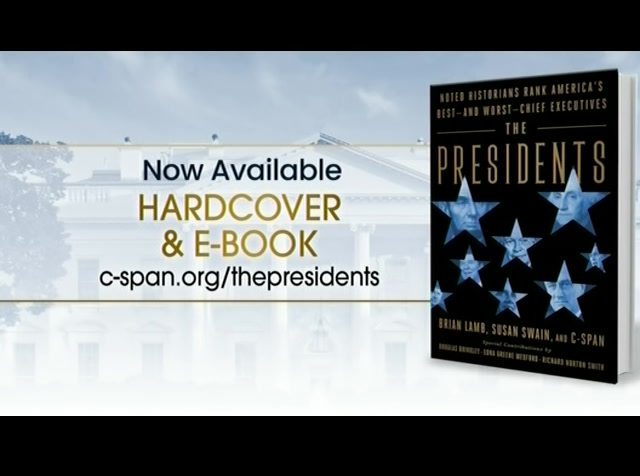 it's great vacation reading, available wherever books are sold. a look at our programming for thursday on c-span, house returned 10:00 a.m. eastern for general speeches starting at noon. it's expected to vote on a two-year budget agreement that also would raise the debt limit. the senate back at 10:00 a.m. eastern to consider the nomination of mark to be the chair of the joint chief of staff with the final confirmation set for just before 2:00 p.m. the house oversight and reform committee to vote on a resolution on kellyanne conway. in contempt of congress for refusing to confide with subpoena for testimony. 1:00 p.m., immigration customs enforcement acting director matthew testifying before the house appropriations subcommittee regarding oversight of his agency.
10:59 pm 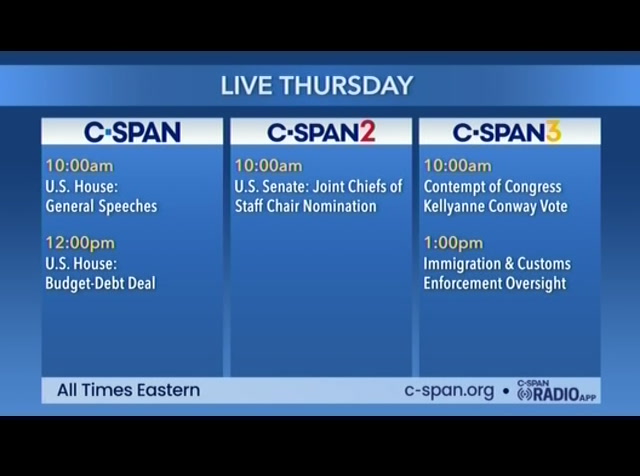 >> 1979, small network, we let viewers make up their own mind. bring you unfiltered content to congress and beyond. television and online, c-span into her unfiltered view of government. so you can make up your own mind. >> nancy pelosi held a news conference following robert mueller's testimony on capitol hill. she was joined by the chairs of the house judiciary, house intelligence and house oversight committees. this is half an hour. [inaudible conversations]
left
right
Borrow Program
tv

President Trump spoke to reporters on the South Lawn prior to departing for a fundraiser in West Virginia. The president offered his first reaction to former Special Counsel Robert Mueller's testimony before the House Judiciary and Intelligence Committees earlier in the day. "We had a very good day today - the Republican Party, our country," he said. "There was no defense to this ridiculous hoax, this witch hunt that's been going on for a long time." He said the Democratic Party was "in shambles" and criticized the former special counsel's performance on Capitol Hill. "I think Robert Mueller did a horrible job, both today and with respect to the investigation. But, in all fairness to Robert Mueller, he had nothing to work with," said the president.