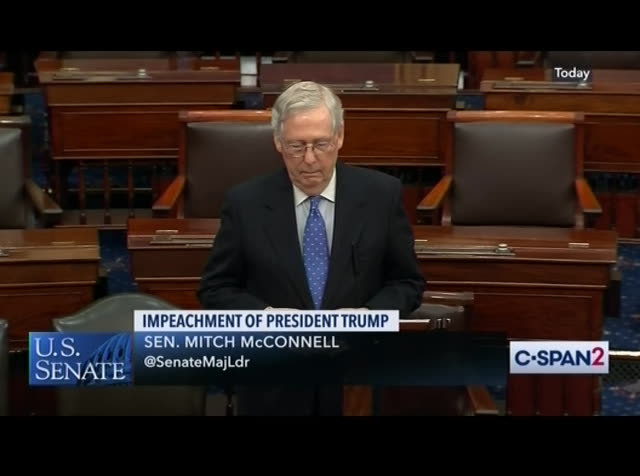 outcome would portray it. the senate's duty is clear that when the time comes they must fulfill. now mr. president, last night the house of representatives voted to impeach president donald trump. it's only the third time inin te nations history that the president of the united states has been impeached.
11:48 pm 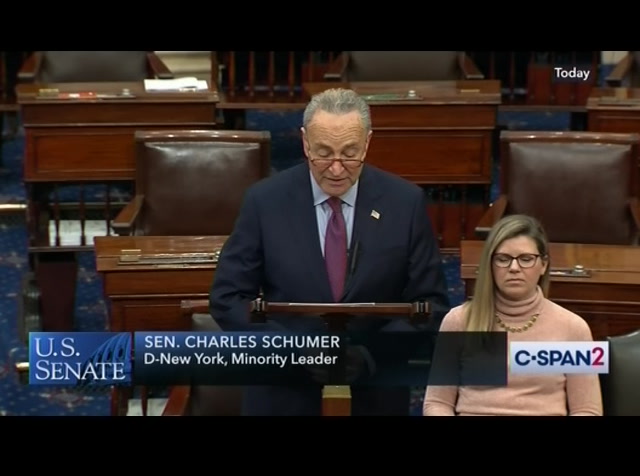 he abused the power of his office by soliciting the interference but to benefit himself personally. but they obstructed congress in those matters it had a grave injury to the grand democracy. the founders and their wisdom gave the house the power to accuse the power to judge a now
11:49 pm 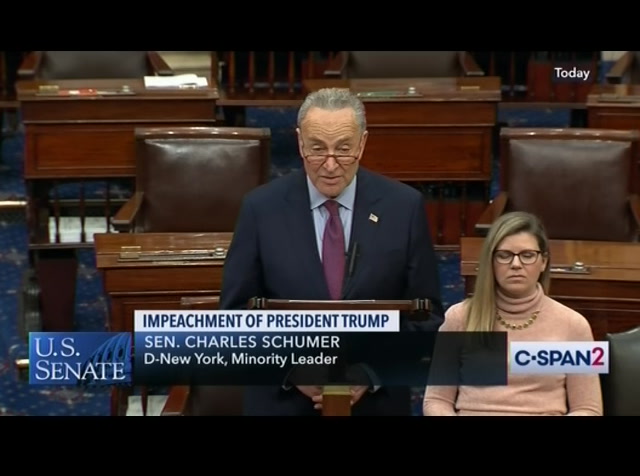 the nation turns its eye to the senate. what will the nations see. while the nations see what alexander hamilton's all, a body of government with enough to preserve the impartiality or see the senate dragged into the depths of partisan fervor. the nation witnessed how the leader sees his role in the chapter into demonstrating the fundamental weakness of the president's dissent. it's the legitimate because the house voted along party lines
11:50 pm 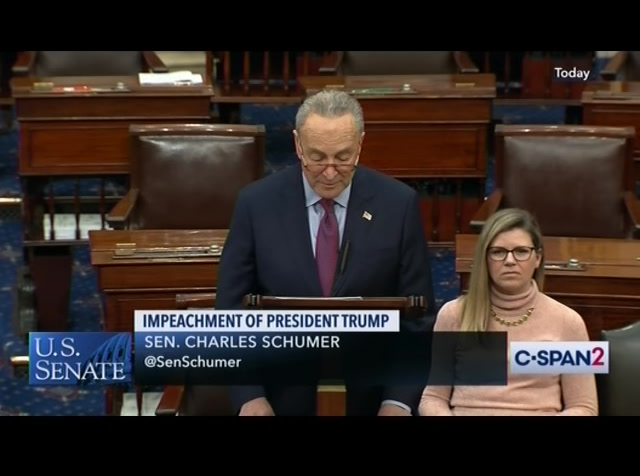 into their blind fealty to the president. it was motivated by partisan rage. this from the man who said i am not impartial, i get no attention to be impartial if us to make president obama a one term president. leader mcconnell claimed democrats impeach the president for asserting executive privilege.
11:51 pm 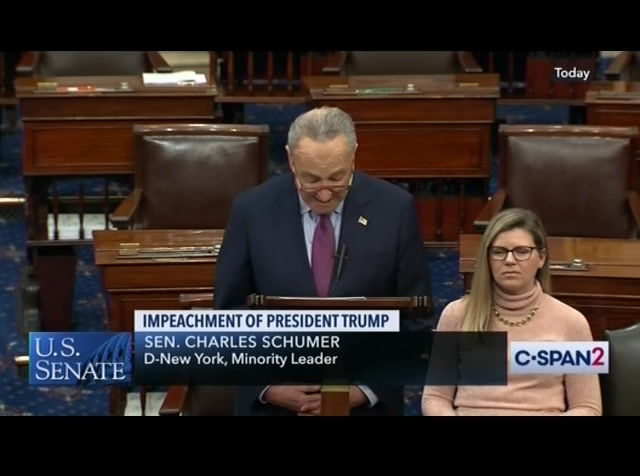 a key claim of absolute immunity into the white house counsel wrote a letter stating simply the administration wouldn't comply with any subpoena from pursuing legislation to help the american people. leader mcconnell knows very well they've passed hundreds, literally hundreds of bills that gathered dust here inon the sene to the graveyard by none other than himself who called himself the grim reaper. members of the senate, members of the 116th senate have been denied the opportunity to
11:52 pm 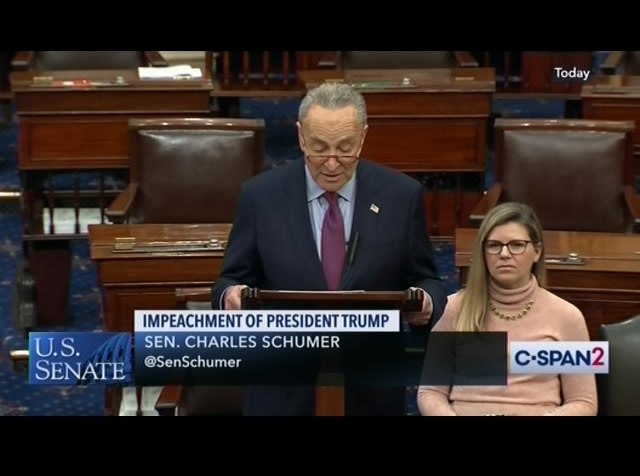 legislate a leader mcconnell has chosen not to focus on these issues and none of these bills on the r floor. the house didn't afford the due process and it does well i and block witnesses and documents from congress in unprecedented fashion. it was the least thorough and unfair impeachment in modern history.
11:53 pm 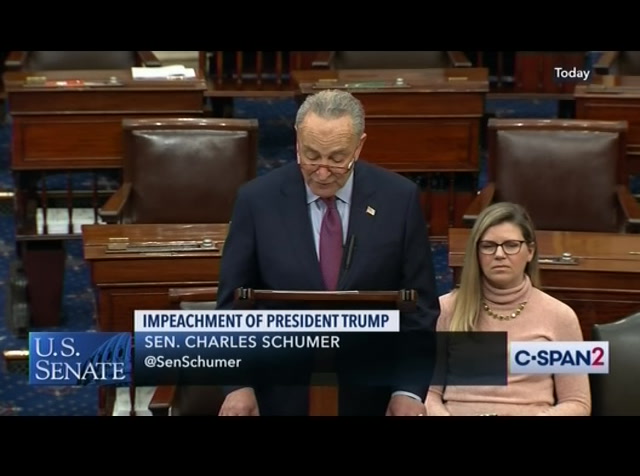 he is plotting a. from fairly presenting their case to have witnesses explained their knowledge of the alleged malfeasance. breaking with precedent and strong-armed the caucus into making this the first senate impeachment trial that heard no this. is the president's case so weak that none of the president's plan in defend him under oath?
11:54 pm 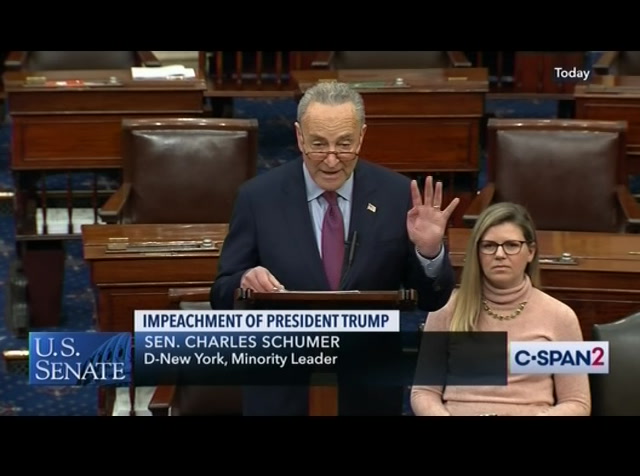 is the president's case so weak that none of the president's been in defend him under oath? if the house case is so weak, why is leader mcconnell so afraid of witnesses and documents? we believe the house case is strong, very strong but if republican leader believes it is ntweak, why is he so afraid of relevant witnesses and documents that willmott for hours of each of us. it is true as the theater has -- leader has decided to keep them from boiling over however their vision of the senate is a far cry from the partisan body senator mcconnell has created.
11:55 pm 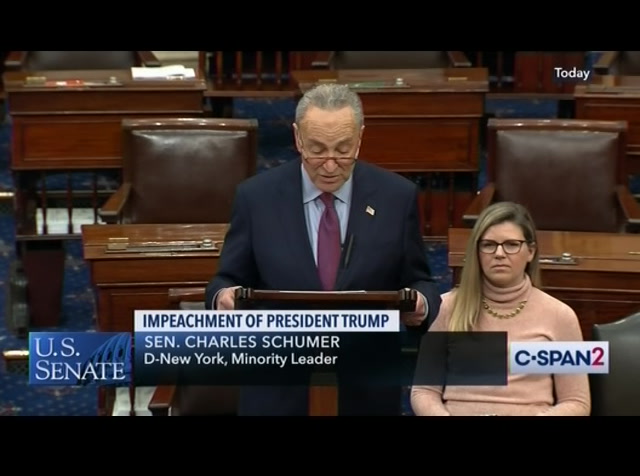 the most glaring of all was the fact theed 30 minute reminder contained hardly a single defense of the president of the united states on the merit. almost none defended the president of trump because they can't. in the wake of the enormous amount of evidence covered by the house investigators, for much of it in the form of testimony by top trump officials in the administration tried to silence the republican leader couldn't refute the accusations against the president with facts. the republican leader complained about the process but not in
11:56 pm 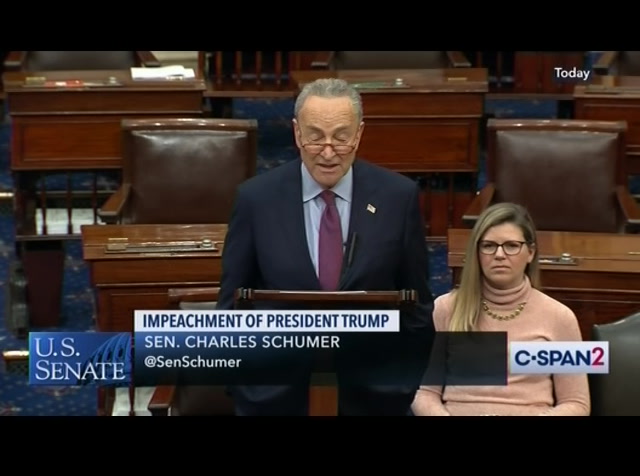 defense of the president's conduct on the merits. that in andf of itself is a damning reflection of the state of the president defends. our goal from the senate above all should be to conduct a fair and speedy trial. i've proposed a reasonable structure that would do just that. for witnesses only those with direct knowledge of the charges made by the house could provide a potentially illuminating testimony, strict time limits on each stage of the process to prevent the trial from dragging out for too long. it's eminently reasonable and fair the group that had no partisan bias would come up with this type of proposal.
11:57 pm 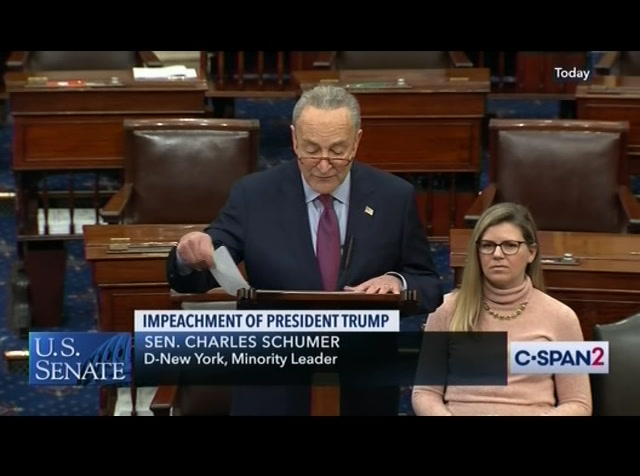 i have yet to hear one good argument why it les bless evides better than no evidence particularly in such a serious moment as the impeachment of the president of the united states. in the 30 minute he didn't make one argument why the witnesses and documents shouldn't be part of the trial. president trump says he didn't receive due process and the impeachment inquiry. due process is the ability to respond to charges madend againt you and present your side of the case and to provide documents at every stage of the process. he chose not to. still democrats are offering due process again here in the sena
11:58 pm 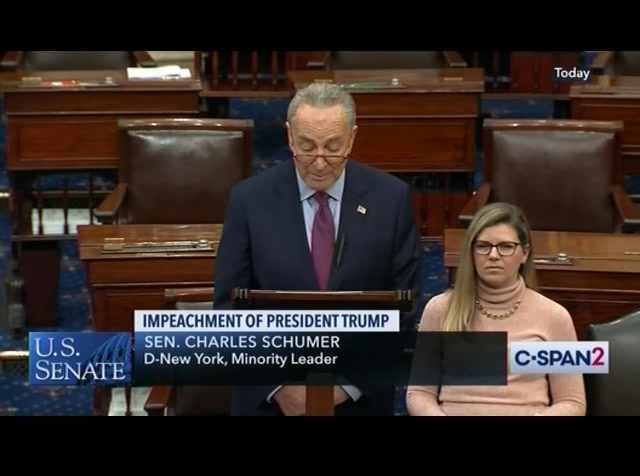 senate. the witnesses are top trump appointed officials. we don't know if the testimony with incriminate him but the testimonyim should be heard if e president's council wants to call other witnesses with direct knowledge of why it was delayed we say they should be able to do sold. i suspect he would rather hide or name call because if he really wanted to process, he could do that easily. it easily. one phone call to leader mcconnell telling him to let his aides testify, one phone call to the chief of staff telling them to release the documents to congress, both of these actions would the truth come out.
11:59 pm 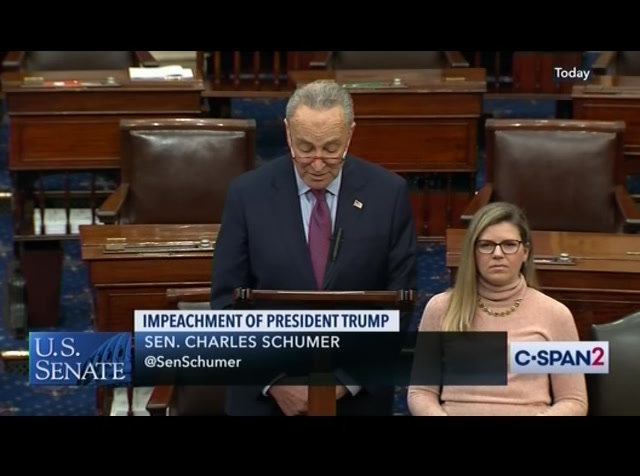 i've asked again can none of the president's been defend him under oath? to my republican colleagues, our message is a simple one. democrats want a fair trial that examines the relevant fact we want a fair trial. the message of the moment is he has no intention of conducting a fair trial or acting impartially, no intention of getting the facts. despite the disagreement i will meet with him soon to discuss the rules. but they will influence whether they live up to the constitutional duty to serve as an impartial court of impeachment in the coming weeks, republican senators will face a choice. each republican senator will face a choice. do they want a fair trial, or do
12:00 am 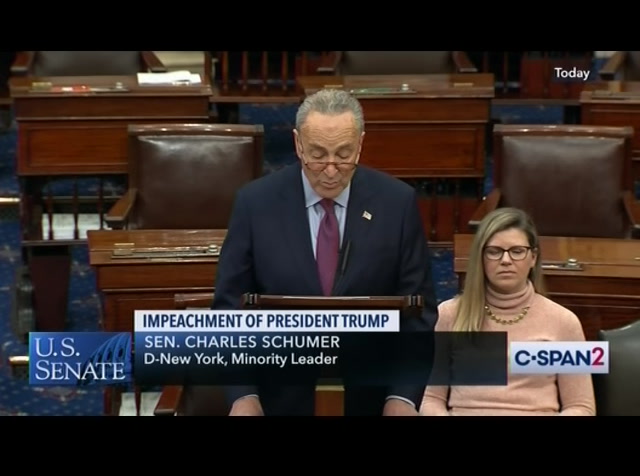 they want to allow the president free reign. each senator must ask him or herself did you want a fair trial or do you want the president to do whatever he wants regardless of who the fl flaw, regardless the of the consequences to this greato nation. nation.
12:01 am 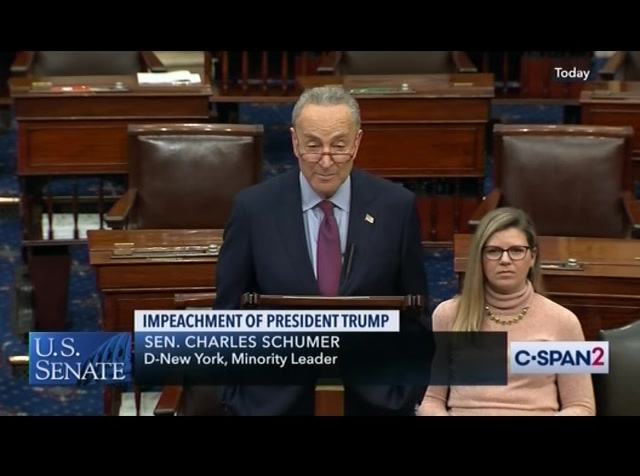 >> that he is not a king. if the republicans proceed to sweep these charges under the rug and permit the president and that is where the saddest and darkest chapters. the right to use personal
12:02 am 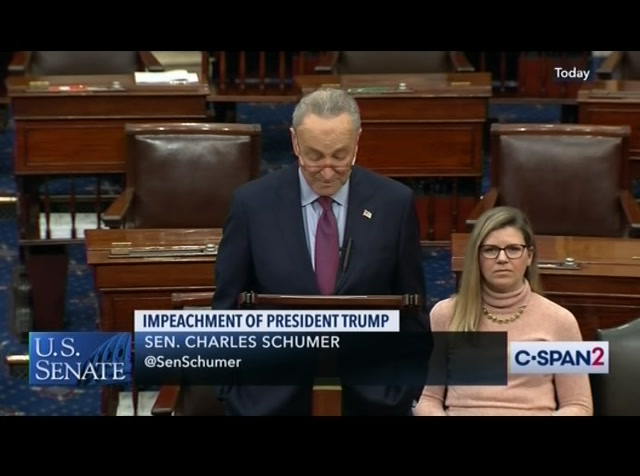 purposes and at his pleasure and here i agree with senator ntmcconnell moments like this are why the senate exist if the president has high crimes and misdemeanors where the conduct is judge with a narepresentatives of the people with impunity he can and others can to tell the president to escape scrutiny in this instance he will do it again and again future presidents will take note in the doers and the most
12:03 am 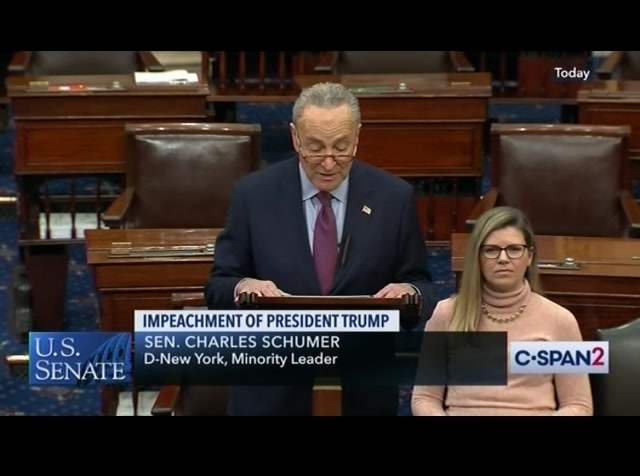 powerful check in the executive the one designed to protect the people from this chapter will be history listen in the modern age with a proud reaffirmation of those founding principles. the overpowering partisanship of our times in the senate's capacity to overcome it moments like this is why the united states and it exists.
12:04 am 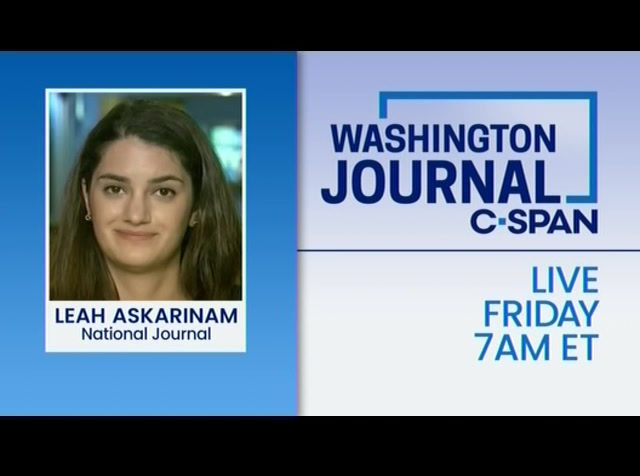 it was empty and then the intelligence came right through and we spoke for about an hour it is like a cliché
12:05 am 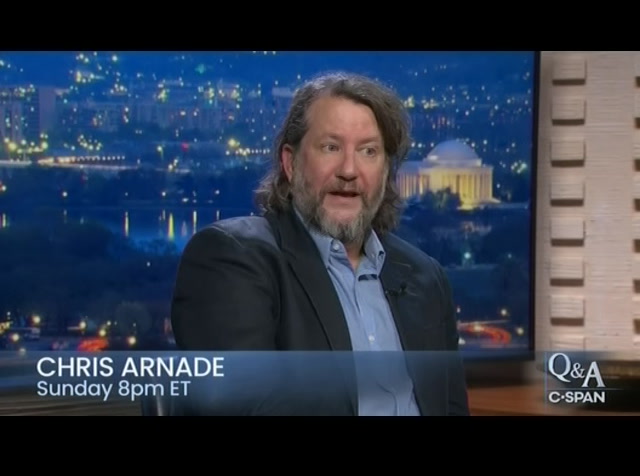 everything wrong that can happen to somebody and eventually how do you want me to describe you. and said i'm a prostitute and a mother of six and a child of god. the speedway that started off with worldwide fame and with a healthy sport and a healthy track one of the most famous
12:06 am 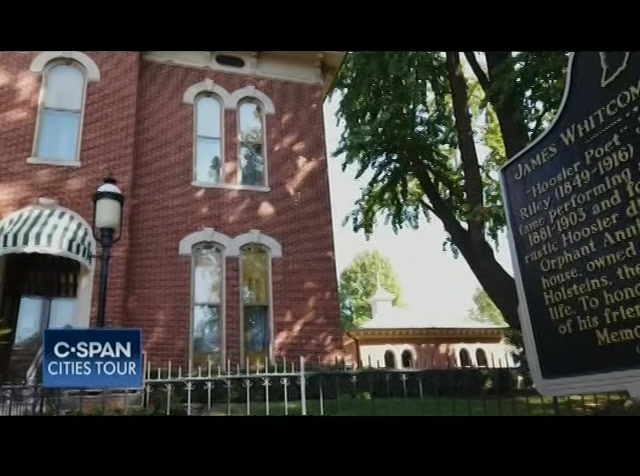 authors to come out if indiana and describe him of what a hoosier was. >> martin luther king dedicated his life he had no support from the campaign speech writers. and then to speak to people directly and be counted upon
12:07 am 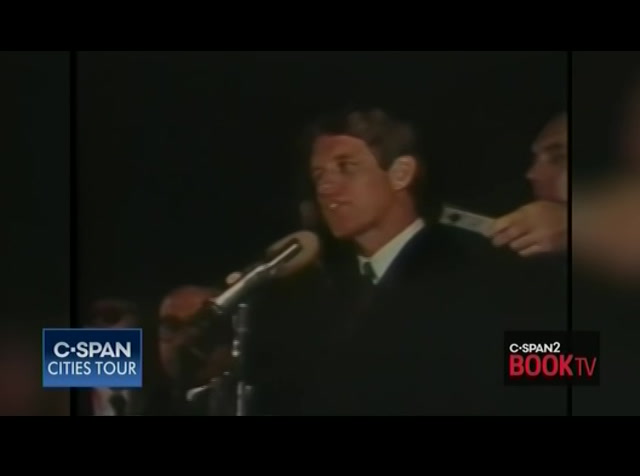 to do the right thing. and then to address the crowd that gathered. and then to walk through the piece and that's harrison's character
left
right
disc Borrow a DVD of this show DVD
tv

Senate Minority Leader Schumer responded to Majority Leader McConnell's remarks on the impeachment of Pres. Trump. He questioned why Senator McConnell doesn't want any witnesses at the Senate impeachment trial. Senator Schumer went on say that President Trump is not above the law.