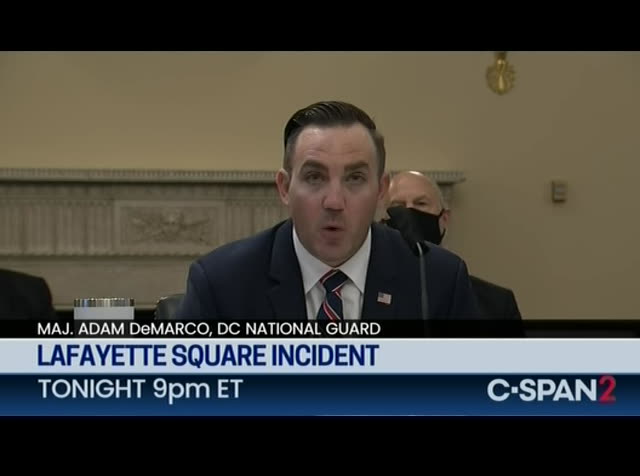 lewis said, we see something that is not trite, not just, not fair. no moral obligation to say something. to do something. military officers support and defend the united states constitution, the bedrock and guiding principle. foundation of the trust safely placed in the armed forces by the working people. and it compels me to say something. to do something. about what i witnessed on june 1st at lafayette square. >> district of major adam demarco testified earlier today regarding recent incident in washington dc's lafayette square. where protesters were forcefully removed prior to president trump's follow-up in a church. watch the entire hearing tonight nine eastern, on "c-span2". reaction to the 1 trillion-dollar senate republican coronavirus response plan continued on the senate floor this morning. the senate majority leader, mitch mcconnell calling on depressed to start negotiating
6:16 pm 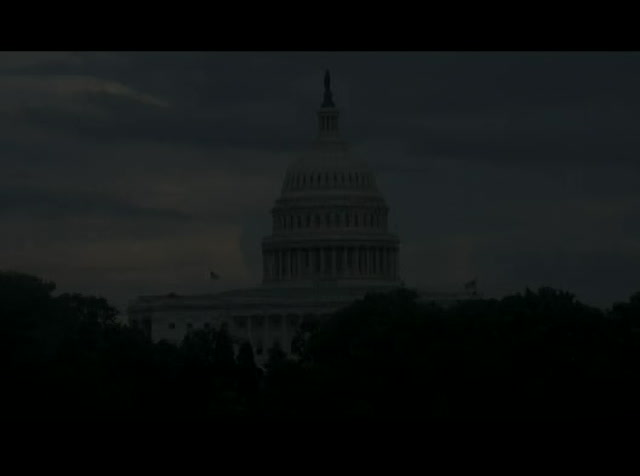 with them. yesterday senate republicans look forward to the heels act, our framework for another round of historic relief for american workers and families. our nation stands in a challenging crossroads. we have 1 foot in this pandemic and 1 foot in the recovery. we've kids to go back to april and until we have a vaccine, we cannot go back to normal either. what the american people need is smart, safe and sustainable middleground and may congress help to construct it. that is exactly what our merger proposal would do. everyoneou knows that another rescue package will need to be bipartisan to pass the senate. so the question before the countryhe is not look quite simple. were going to seeto the versions of house and senate democrats that have helped is unanimously
6:17 pm 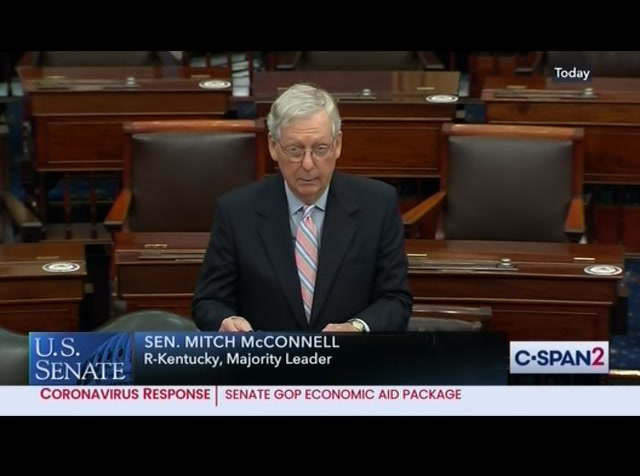 passed the cares act back in march. or are we instead going to see the same democrats decided to block police reform in june, and lunch out that senators tim scott's proposal instead of working with them to make law. in other words, madam president, does the speaker of the house and the democratic leader believe that struggling americans deserve s an outcome. what did they want to stay on the sidelines and recite talking points. yesterday, even before the democrats seen our legislation, they began attacking it. the tired old partisan, they were charted out. where releasing a proposal that wants to give schools even more reopening money and house democratsn bill. which would continue additional federal unemployment benefits
6:18 pm 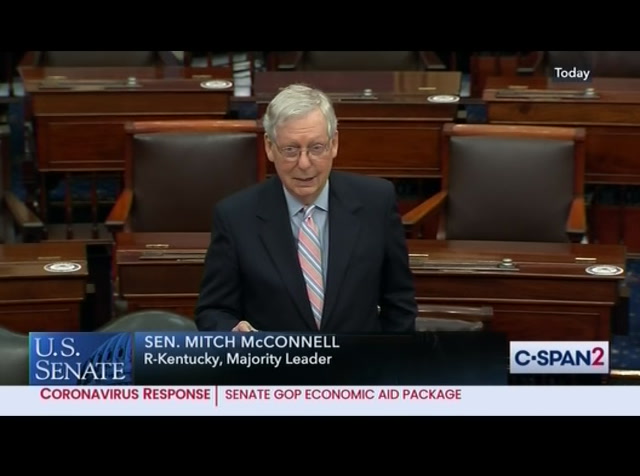 many times the amount that the democrats established through the last process. we were informed here in the floor that those republicans are right many people don't want federal government to help anybody. that is beyond parody. republican, put forward a trillion dollar proposal for jobs in healthcare including direct cash households and even more cash to unemployment people in the democrats a improves we don't want to help people. they say prince we do not want to help people. these are not serious statements. his politics as usual. with talking points that went stale 20 years ago. but the week is jo on the heels act the former provisions that i frankly dare my democratic colleagues to actually say they
6:19 pm 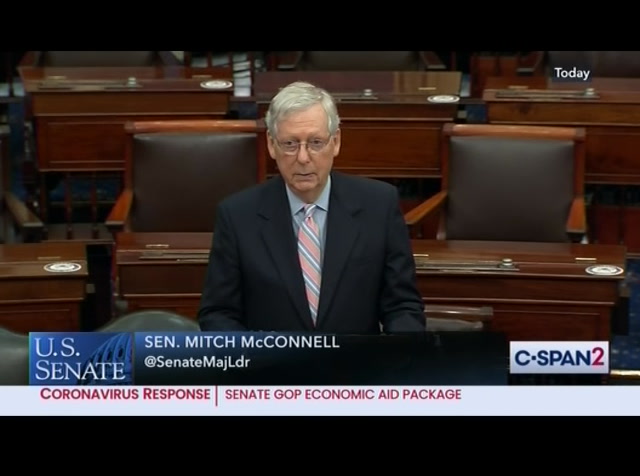 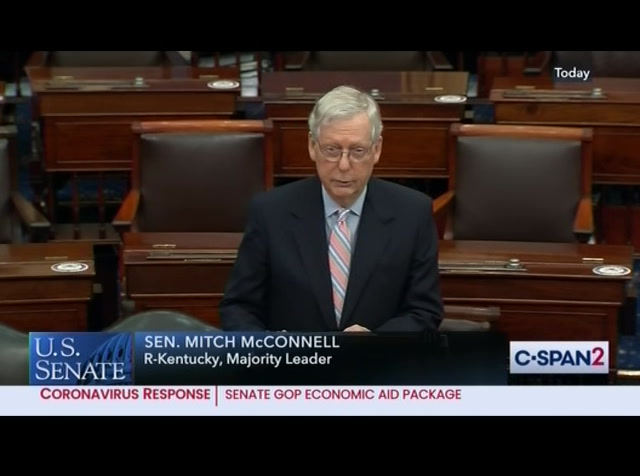 flexibility to childcare providers so that americans can have a safe and mark normal school year. if democrats block action, school districts will get none of it. republicans want to create a second targeted round of ppe to keep mainstreet small businesses abovep water. if democrats votera negotiate, e now open size will come down and going out of business signs will replace them. republicans want to proactively expand our domestic manufacturing capability for mass of ppe medical countermeasures. democrats refuse to negotiate, will be just as dependent on adversaries as competitors in the next crisis. republicans want to protect doctors, nurses, school districts, and universities. the second epidemic of endless lawsuits
6:21 pm 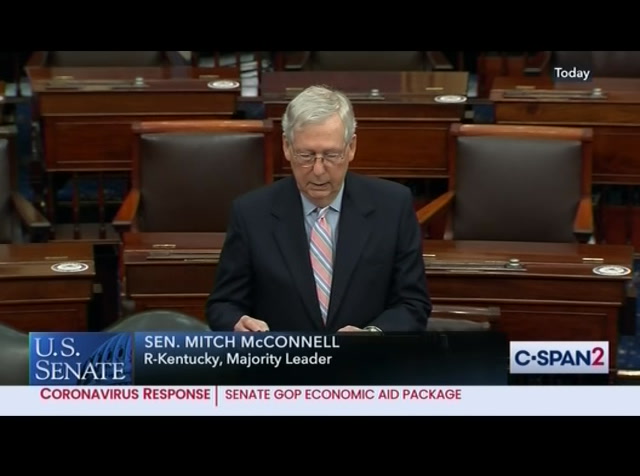 . if democrats which come to table carnations reopening will be at theat mercy of trial lawyers. publicans want to go even further to healthcare providers and hospitals and fuel the spread theci vaccines. democrats won't let us come americans with deceptive fingers and hope the medical system remains stable. so to be clear that i'm president, republicans are n not proposing the cut any relief. under current law, expanded act, it expires and is replaced with nothing. under current law are more more no more direct payments and no second ppe sprayed every single thing the forward as a way to get more relief and the people'. her democratic colleagues pretend is a controversy. it isre controversial somehow te taxpayers should not pay people
6:22 pm 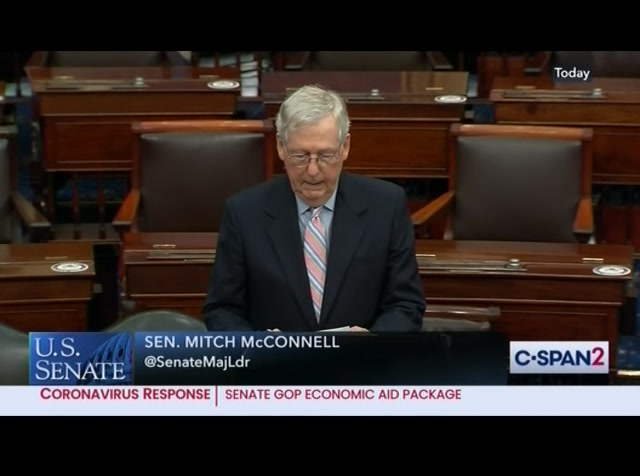 more not to work then people who do go back to work. they want to pretend it is controversial. the taxpayers should not pay people more, not to w work. and people who do go back to work. the american people to one controversy. they call that common sense. they call it basic fairness. this is absolutely trying to be generous and provide additional federal relief to people who have been laid off and we should not be redistributing money away from s essential workers who hae remained at their posts. we should not be taxing somebody who has been stocking shelves for months for the government to pay from neighbor on the she makes to senate home. that is what's we are talking about. taxing essential workers to pay the neighbors a bonus to stay home. one study by university of west
6:23 pm 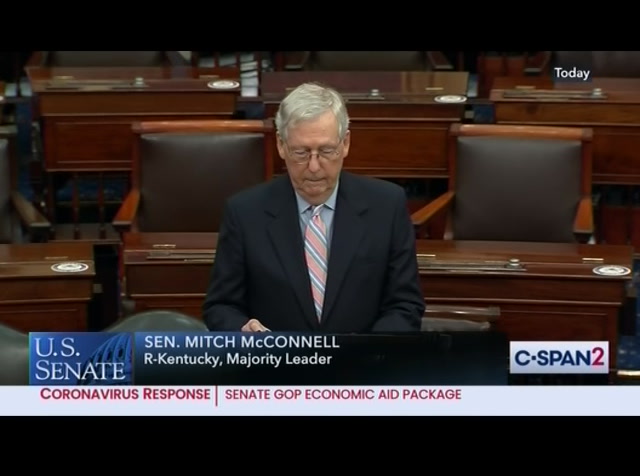 just found that these benefits can exceed people's previous incomes two thirds of the time. two thirds of the time. the found a medium recipient earn 134 percent of the prior salary. mas have are making even more than that. that's just not fair. it is not compatible with the reopening economy and more than six in ten americans business creates a disincentive. if the democratic house majority leader said just this morning and her perspective has validity to it. and we ought to deal with that. it is not $600 or above. there is majority leader in house. the democratic majority leader said it is lawsuits hundred dollars or best solicit passes partisan to shots and have an adult conversation. look at it this way. think about one street, one
6:24 pm 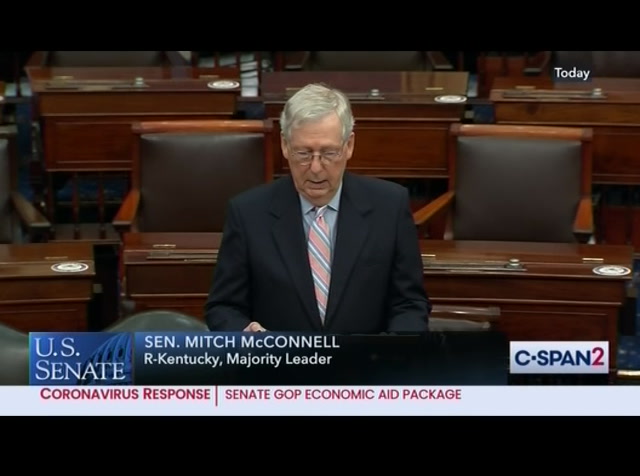 block and one neighborhood anywhere in america. think how they would benefit of this #into law. right now, several families on the block probably have no idea whether their kids will be headed back to school in a few weeks. our bill would provide the money in legal certainty for school districts to reopen safely. let'sw talk about the pocketbooks. likely everything box and street rh checking account would get another $1200 per adult and $500 for dependents. for a family of four we are talking about $3400 in cash. maybe these homeowners among millions of emergency have been joblessness. as we discussed, they get hundreds of dollars more every week and ended unemployment.
6:25 pm 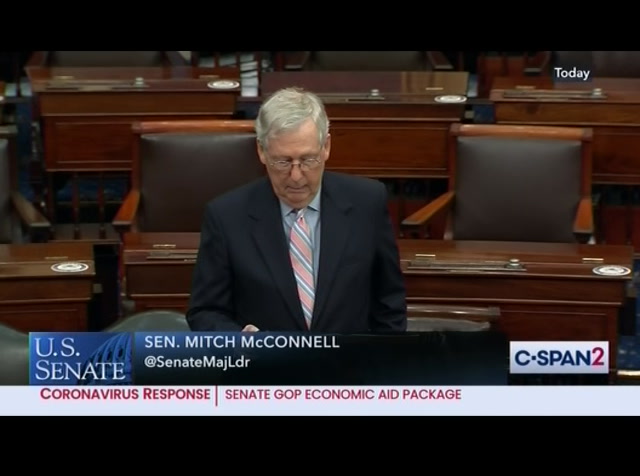 because were doing it smarter, if anyone on the street owns a coffee shop or contracting business, they will hear from workers is that learning more by staying in the home. those unemployed workers will get back on the job faster and our bill supercharges incentives to rehiring and helping for health and safety in the workplace. maybe some other people on the street of the historical paycheck protection program. their employer is considered closing down. without relief nearly exhausted. our targeted second-round of ppe to keep the paycheck coming instead of a pink slip. it may be a retired couple lives on this block. if our proposal for medicare part b premiums becomes law, though be protected from a spike
6:26 pm 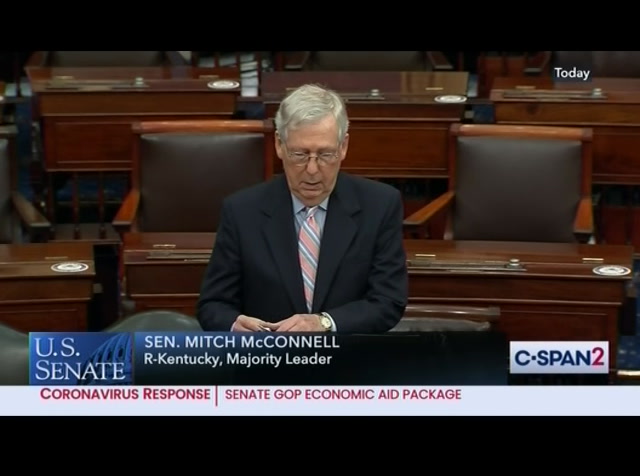 during the pandemic. in the cost. needless to say everything a person on the streeton when benefit from even stronger federal investments in the diagnostics, treatments, and vaccines will ultimately in this healthcare battle all of us. so is madam president. it is very simple. partisan histrionics will not get any american family any of the relief i just described. calling names will not get through the districts one time. washington finger-pointing will not have one sent to anyone's unemploymentoy check. democrats face a simple choice. they can come to the table, work with republicans and engaged seriously to make law from the american people are they can stay on the sidelines and point fingers and let another rescue package go the same way as the police reform bill that they killed back in june. republicans are ready to govern
left
right
Borrow Program
tv

Senate Majority Leader Mitch McConnell called on Democrats to negotiate with Republicans on a new coronavirus relief bill or, he said, no bill will be passed. On Monday, the Kentucky Republican unveiled a $1 trillion dollar plan to continue coronavirus-related unemployment, but reduce the additional payment, for another round of $1,200 checks to low- and moderate-income taxpayers, and to provide more money to states.