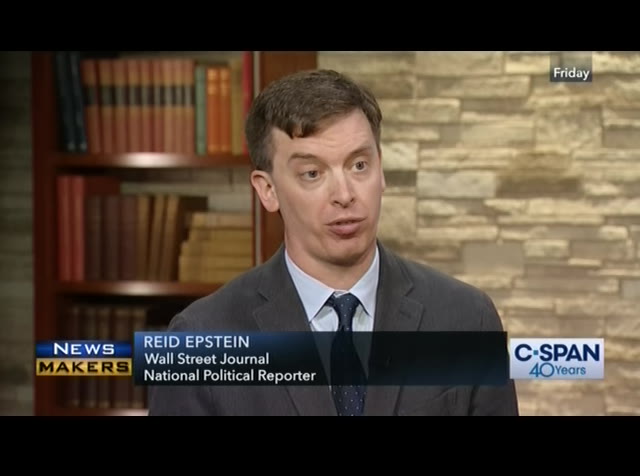 private fundraisers altogether. in an effort to attract support from grassroots donors. it is a different electorate from the primary to the general election. if these candidates have not built networks with potential themselves, they put at a significant disadvantage come the general election next summer. >> 30 seconds left, anything to add? >> the secondary worry is the tv to not do geo the job they needed to do. suburban women were what powered the 2018 victory for the democratic house. we will need higher latino and african-american turnout and that takes money, investment and real cooperation. we don't know if it is going to happen. >> it is early in the process but it is certainly interesting at this point.
10:38 am 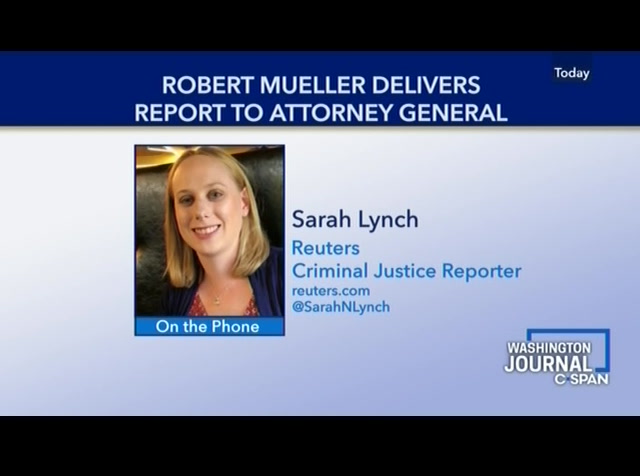 thank you for being our guests. we will have you back. thanks. >> thank you. >> sarah lynch with the headline, how much of the molar report must the attorney general release? she is joining us on the phone. first, what does happen next? >> thanks for having me on today. summary ofep is a their findings. there may be a lot of details we still will not see in this. it appears based on the letter that was sent to congress on friday that there will be several stages of this. the first could come as soonest today. that will be topline findings. answer some of the burning questions like was there collusion? there may be a another stage of
10:39 am 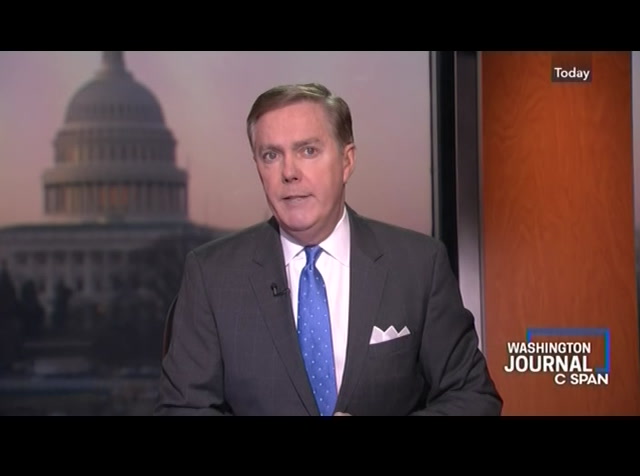 , that will be a trickier part. that will involve looking at information that may not normally be made public but could be in the potential public interests. where there are certain individuals they declined to prosecute and why? i know we will get some findings soon this week. host: when you say topline, how will that be released? what do you know at this hour? guest: what they are planning to do at this point is reached a summary or -- reach a summary or principal findings to the key members, the chairman and ranking members of the house judiciary committee and the senate judiciary committee. and a copy to leadership. and a copy to the white house and a copy to reporters. most reporters are going in to
10:40 am 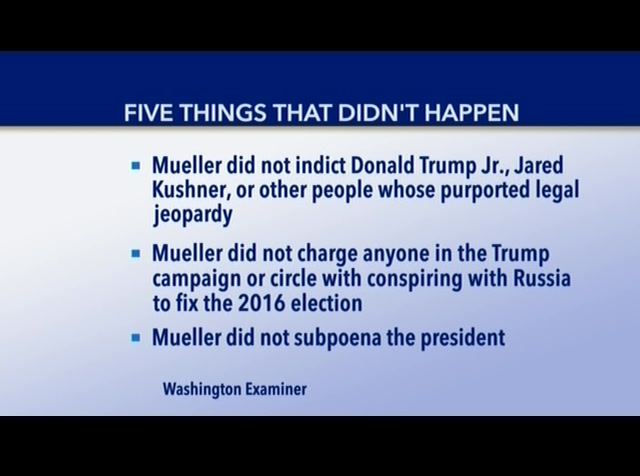 it justice department and will be electronically transmitted as soon today. host: this is from the washington examiner and the opinion piece by byron york. he has the following summary. five things that did not happen in the robert mueller investigation. let me go through all five of them. first of all, he did not indict donald trump, jr.. -- donald trump jr., jared kushner or other people. nationally -- . me president did not fire noter and the president did interfere with the robert mueller investigation. guest: that is true. we have been told by an official that there is not going to be any more indictments expected out of the molar investigation -- mueller investigation.
10:41 am 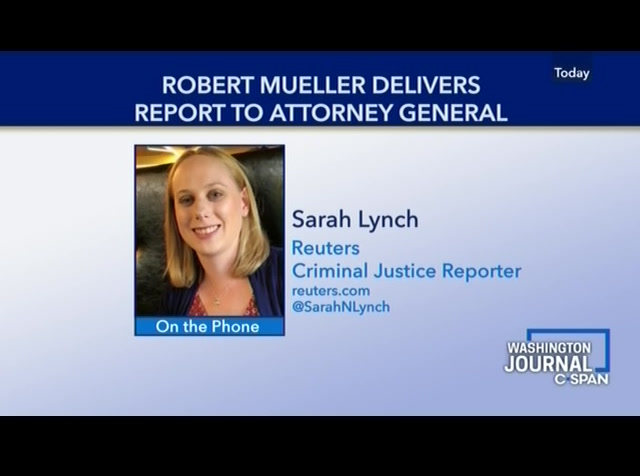 some of that is still confidential. we only have a public version of what the mandate was. there was actually a detailed wasard -- version that released in august. with all that said, we have to remember that there is a lot of factors because as he was doing his investigation, he came across potential violations of law and they were sent to other u.s. attorneys. that is the office that brought the primary charges against the president's former attorney, cohen.l keoh that -- they are investigating other parts of the trump business. we know state prosecutors in new york are looking at the trump foundation. i would not necessarily jump to the conclusion that this is
10:42 am 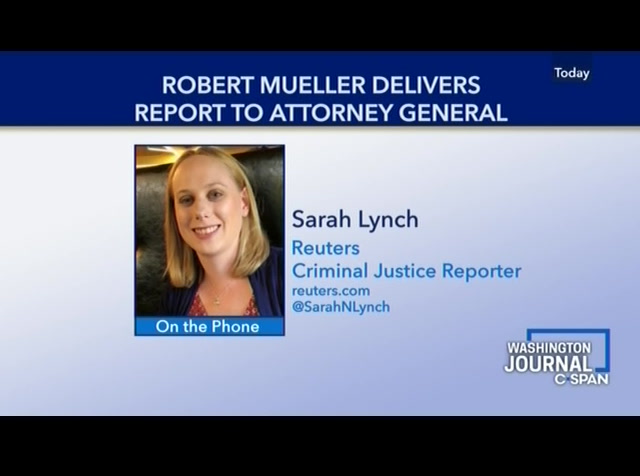 over. the mueller investigation, yes. that is over. that is what is meant by this report being completed. there are many other factors that have not come to light. host: we are talking to sarah lynch. does pelosi says no waste -- no way does she want a classified briefing. she wants this in the public. explain why that is important. guest: i think a lot of people, i don't know if republicans would agree but most democrats would say that is important because classified information would not be released unless there was a special exception made. we have seen that done before. it is going to be a difficult question for attorneys at the justice department. a lot of -- there is a lot of information in this report that could be confidential. it could be not only classified information but it would require a whole process of working with
10:43 am 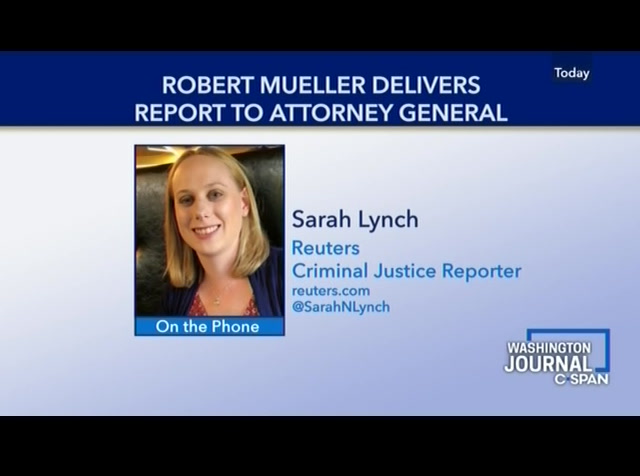 intelligence agencies. there is also other information in their such as grand jury law, it isd by required for government attorneys to release rancheria material. i don't know how they would handle that. material.ury i don't know how they would handle that. that is very tricky. and then there are other issues that could come to light like executive privilege. even though trump has not , he answered written questions to the council. i think the question is whether he was truthful in answering those, which i am sure he had a lot of assistance from his lawyers in doing so. it behind closed doors. it is certainly possible and it congressoutinely that
10:44 am

can reach classified information. that would mean that the public would not be able to have access to what they have learned. the: are there lessons from iran contra investigation? guest: those reports were not all immediately released. star was probably the fastest one. he gave it to congress and within two days, they voted to release it. that was under a different mandate and so was the iran contra. back then, we had a different law on the books. the independent prosecutor was supposed to turn it over to a court. to decide whether or not to release it. here, we are dealing with a different set of regulations. robert mueller is only the second person in history who has ever been appointed under these
10:45 am 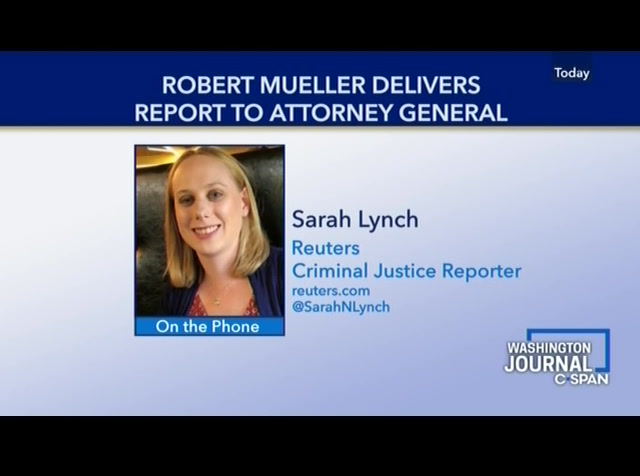 rules which are internal justice department rules. they specifically say that the special counsel investigative report is confidential and once it is handed over to the attorney general, the attorney general in his power or her toer has the authority decide what to release, what not to release and it has to be along the lines of what they under justice department rules and regulations. that is why grand jury material cannot be released. that is a violation of law. we are dealing with a different set of circumstances. host: the attorney general is scheduled, at some point to brief the administration on the findings, the president is spending the weekend at mar-a-lago, so how will that come down? how will the white house be notified? >> our understanding will be different. on friday, there was -- stephen
10:46 am 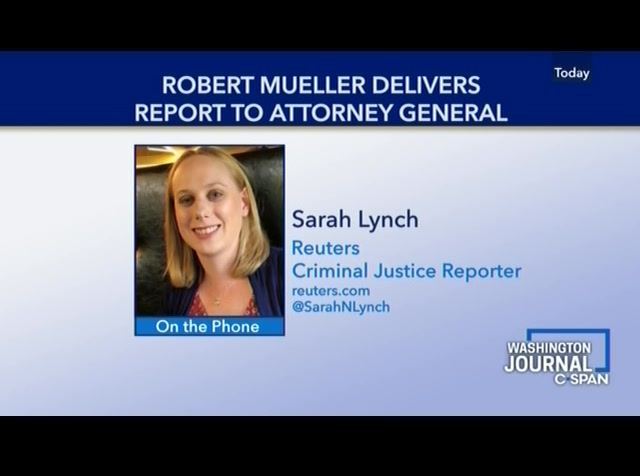 hillwent over to capitol to hand actual paper copies to the staffers for the judiciary committee. toelectronic copy was sent the leadership. at the same time, the chief of andf for bill barr called the attorney for jump -- trump was handling this. getting, at some point, as soon as today, an electronic copy of the principal findings. i don't know this for sure but i would imagine that at some point fore would be a call present trump. host: final question for you. you alluded to this a moment ago but what is your day going to be like? guest: well,
10:47 am 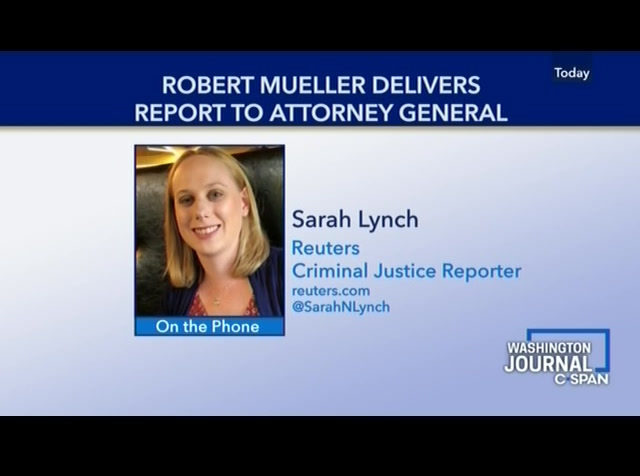 [laughter] colleague, andy sullivan was there with me yesterday, we have a lot of reporters going there today. today becausepens the attorney general said it could happen as soon this we can. we are on pins and needles like we were on friday. , all of the reporters were chained to our desk, waiting to see if the report had been completed. now, we are doing the same thing but only waiting for the summary findings. , who coverslynch the justice department for writers -- reuters. explaining how much of the molar report -- mueller report must be disclosed. thank you. guest: thank you for having me. host: this i
left
right
Borrow Program
tv

Outgoing Food and Drug Administration Commissioner Dr. Scott Gottlieb discussed his tenure and the future of the FDA at an event hosted by the Brookings Institution in Washington, DC. Among the issues discussed were tobacco and nicotine regulation, rules governing the development of generic drugs and biosimilars, and drug testing on animals. Commissioner Gottlieb was set to step down two weeks after this event took place.