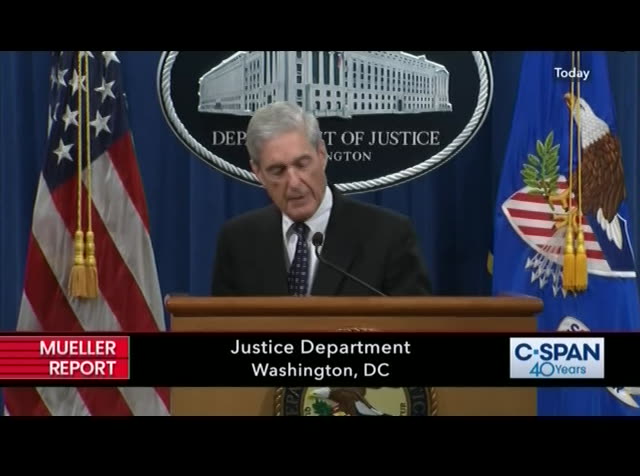 >> sir, if you are subpoenaed, will you appear before congress? >> no questions. robert r: hours after mueller concluded his statement, jerry udiciary chair nadler held a brief press conference with reporters in new york. he talked about the report and next.comes here is more now. >> good afternoon, first, i want special counsel robert mueller for his service to our nation over the past two years.
4:59 pm 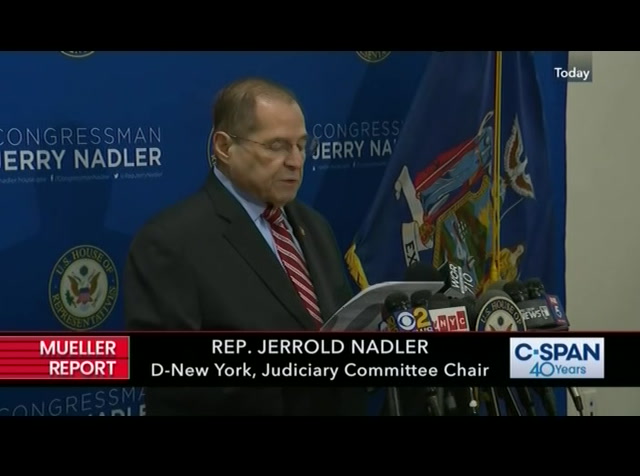 of mueller and his team prosecutors and investigators follow irelessly to facts and pursue justice to the allowed. extent although department of justice policy prevented the special counsel from bringing criminal the president, he special counsel has clearly demonstrated that president trump is lying. he is lying about the special about 's findings, lying the testimony of key witnesses in the special counsel's report all, lying and saying that the special counsel found no collusion. and in a in a statement this morning, special counsel mueller reaffirmed his report. it found evidence russia attacked our political system, that the trump campaign benefitted from russian interference, and trump and those around him repeatedly welcomed russia's support, and throughout the subsequent
5:00 pm 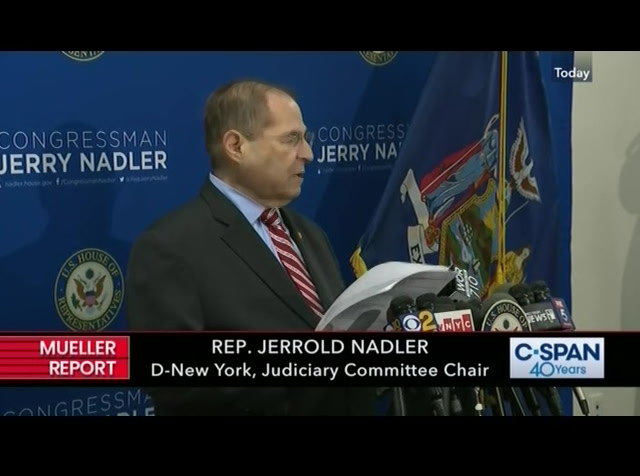 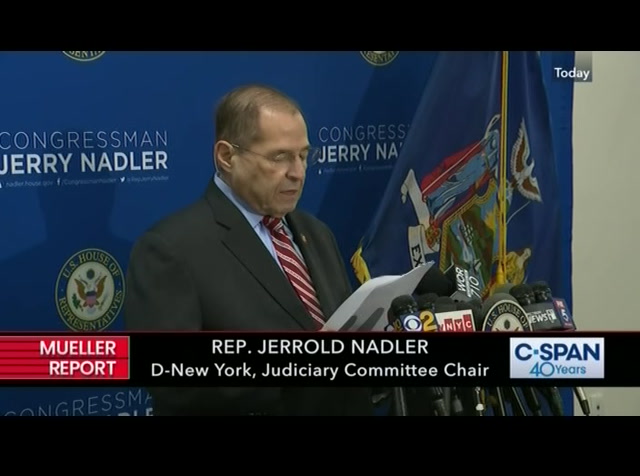 therefore, as mueller again highlighted this morning, caused -- it caused congress to respond to crimes, lies, and other wrong doing of president trump, we'll do so. make no mistake. no one, not even the president of the united states, is above the law. thank you. reporter: moving forward with impeachment proceedings, and given what mueller has said, the report says all he needs to say, will you then subpoena him to testify in front of congress? >> all options are on the table at this point and nothing should be ruled out. what special counsel mueller said loud and clear today to the american people is that president trump is lying when he nos no collusion, obstruction, and that he was exonerated. if mueller wanted to exonerate the president from having committed a crime, he would have said so.
5:02 pm 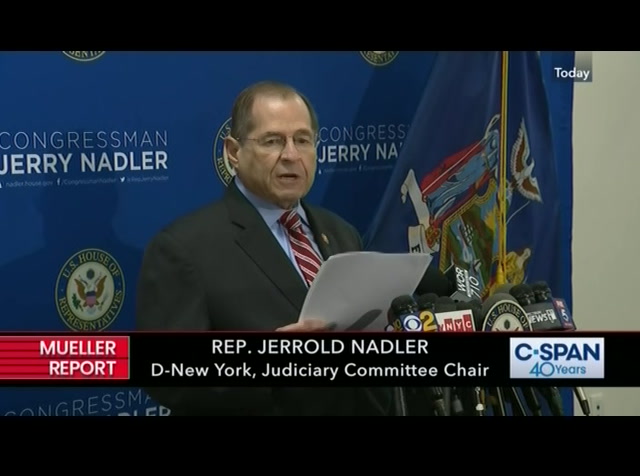 he said he would have said so. instead, special counsel makes clear obstruction of justice, which he found substantial evidence of, is a serious crime, that strikes at the core of our justice system and the constitution points to congress to take action to hold the president accountable. that is exactly what we will do. the president's response to repeatedly lied to the american congressionalore subpoenas is immoral and unlawful, no one is above the law, and we'll hold the president accountable. reporter: with regard to impeachment moving forward with the time on the table, what does that mean specifically? >> are following through with the investigation and we will continue to do so. we'll make decisions as they seem indicated. reporter: will there be subpoenas for mueller to testify, then? >> mr. mueller toll us a lot of
5:03 pm 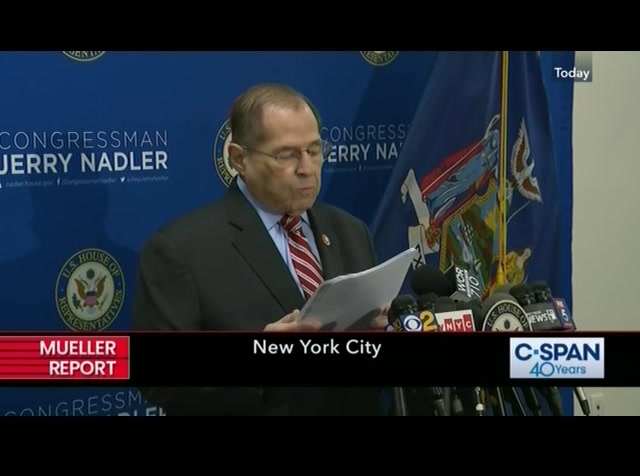 what we needed to hear today. it's very important to be clear on what he told the american people. he reaffirmed what is in the -- what was is in the investigation. which was in the report about the investigation which found substantial evidence russia attacked our political system, the trump campaign benefited from russia's interference, that those around him repeatedly welcomed russia's support, and sought to obstruct justice and undermine the investigation over and over again. the special counsel did not exonerate the president from having committed a crime. doj policy prevented mueller from bringing criminal changes against the president. so, the president is lying about the special counsel's findings, lying when saying the special counsel found no obstruction and no collusion. the attorney general is lying about that, too.
5:04 pm 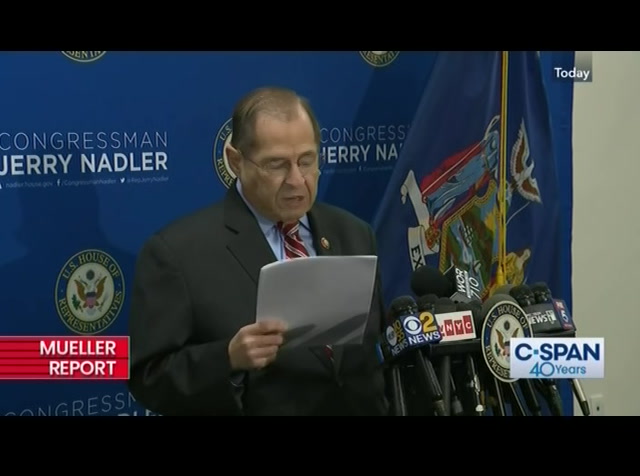 that is serious, and i'll repeat. no one, not even the president is above the law, thank you very much. announcer: the white house also weighed in following robert mueller's statement as press secretary sarah sanders spoke with reporters. here is what she had to say. mueller's statement today, that the statements differ? press sec. sanders: you would have to ask the department of justice, i am not sure about that. the point he already made in the report. we agree with him. collusion, there was no conspiracy, we consider this case closed. he completed his investigation. it is time for everybody to move on.
left
right
Borrow Program
tv

House Judiciary Chair Jerry Nadler (D-NY) responded to Special Counsel Robert Mueller's first public statement on the Russia investigation. Rep. Nadler argued that Mr. Mueller's statement "highlighted" that "it falls to Congress to respond to the crimes, lies, and other wrongdoing of President Trump," he said. "We will do so." On the question of impeachment, Chair Nadler said: "All options are on the table. Nothing should be ruled out."