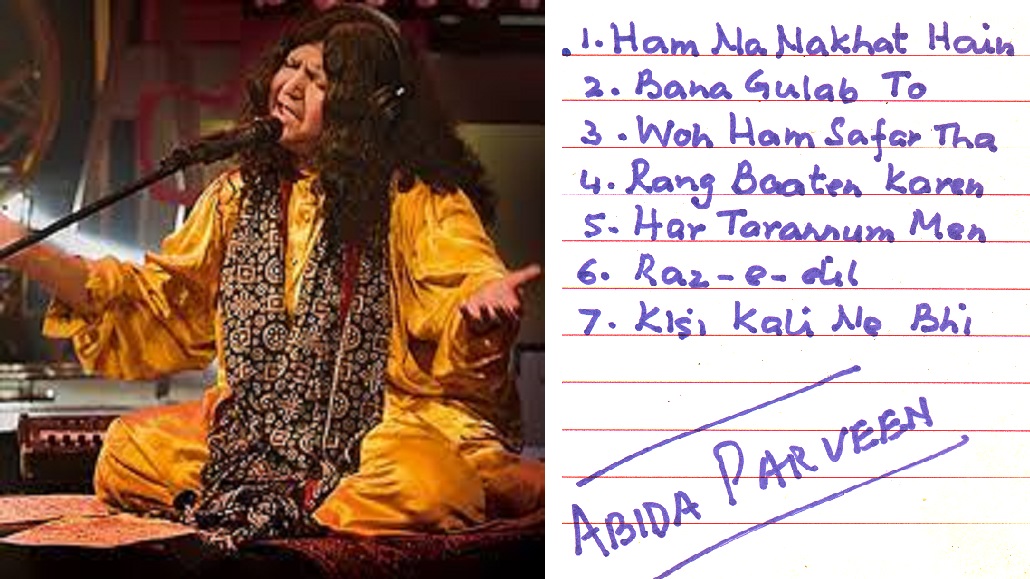 Abida Parveen (Sindhi: عابده پروين‎; born 20 February 1954)[2] is a Pakistani singer, composer and musician of Sufi music. She is also a painter and entrepreneur. Parveen is one of the highest paid singers in Pakistan.[3] Her singing and music has earned her many accolades, and she has been dubbed as the 'Queen of Sufi music'.

Born and raised in Larkana into a Sindhi Sufi family, she was trained by her father Ustad Ghulam Haider who was a famous singer and music teacher. She plays Pump organ, Keyboard and Sitar. Parveen started performing in the early 1970s and came into global prominence in the 1990s. Since 1993, Parveen has toured globally, performing her first international concert at Buena Park, California.[4] She has also performed in Churches several times. Parveen features in Pakistan's popular musical show Coke Studio and was a judge on the pan-South Asia contest show Sur Kshetra[5] alongside Runa Laila and Asha Bhosle hosted by Ayesha Takia. She had appeared in various Indian and Pakistani Music reality shows including Pakistan Idol, Chhote Ustaad and STAR Voice of India. She is among The 500 Most Influential Muslims of the world with the power to induce hysteria in her audience, Parveen is a "Global Mystic Sufi Ambassador". In the last few years she has sung in a Pepsi commercial collaborating with Atif Aslam for this.

Parveen is regularly referred to as one of the world's greatest mystic singers.[6] She sings mainly ghazals, thumri, khyal, qawwali, raga (raag), Sufi rock, classical, semi-classical music and her specialty, kafi, a solo genre accompanied by percussion and harmonium, using a repertoire of songs by Sufi poets.[7] Parveen sings in Urdu, Sindhi, Saraiki, Punjabi, Arabic and Persian.[8][9][10] Parveen notably sung a famous song in Nepali language called "Ukali Orali Haruma", originally by Nepali singer Tara Devi, in a concert in Kathmandu, Nepal which was attended by Govinda and in 2017, she was designated a 'Peace Ambassador' by SAARC.

Parveen is best known for singing in an impassioned, loud voice, especially on the song Yaar ko Humne from the album Raqs-e-Bismil and Tere Ishq Nachaya which is a rendition of Bulleh Shah's poetry.[11] She was bestowed Pakistan's second highest civilian award Nishan-e-Imtiaz in 2012[12] and the highest civilian award Hilal-e-Imtiaz in March 2021 by the President of Pakistan.[13]