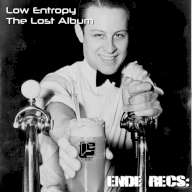 (ENDE275) Low Entropy - The Lost Album
Low Entropy's return to ENDE in 2021 kicks off with "The Lost Album" which is an album he made originally to release on Widerstand Records in 2001 which has remained unreleased for 20 years!!
He explains:
"I sent Daniel (Eiterherd) a demo tape in 1998, and he liked the tracks, and we talked about a release; later, he asked me to do a CD album (real CD run of 500 copies, not a CD-R release) for Widerstand. I finished the tracks, send him the master, and the release was scheduled to happen in early 2001. The thing was, Widerstand ran out of money at that point, so the CD never was released. The tracks stayed in limbo, but eventually Daniel came up with the idea to do a vinyl 2x12" instead, with a stripped tracklist, which was released in 2003"
ENDE had been asking LE if he had any more old tracks unreleased after the success of his best of compilation we released in January 2018. He told us about the "lost album" but that he wasn't sure where it was.
Well..in 2020 he found it! And now it's finally released in full and uncut after 20 years in limbo!!
So as you can expect it has the classic old school breakcore sound made famous by producers like Low Entropy.
OTHER LOW ENTROPY RELEASES ON ENDE RECORDS:
enderecords.bandcamp.com/album/ende226-low-entropy-best-of-20-years
enderecords.bandcamp.com/album/ende104-low-entropy-songs-from-the-sleeping-couch
enderecords.bandcamp.com/album/ende37-low-entropy-the-break-experiment
credits
released April 8, 2021
All tracks by Low Entropy produced 1998-2000. With thanks to Low Entropy and Widerstand Records.