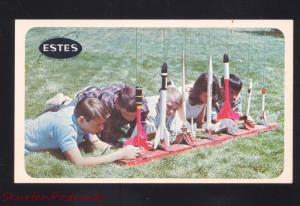 Catalogs from the Estes Corporation.

The 1989 Estes product catalog. They sold (and still sell) model rockets which can be fitted with very real solid fuel engines and launched. This is Estes' copy of the catalog as a PDF and the individual page scans from http://www.ninfinger.org, partially to see how the archive will handle such an upload.
Topic: rocketry

DESCRIPTION
Catalogs from the Estes Corporation.
Estes Industries is a model rocket company that was started in Denver, Colorado, USA. The company was the first to mass-produce model rocket engines with consistent and reliable performance.
Estes Industries was founded by Vernon Estes in 1958; in 1961, the company moved to a 77-acre tract of land on the outskirts of Penrose, Colorado. Rapid growth followed and soon Penrose became known as the "Model Rocket Capital of the World". In 1969, Vernon sold the company to the Damon Corporation of Needham, a company which also purchased a number of other hobby companies including a smaller competitor of Estes, Centuri Engineering of Phoenix, Arizona. Damon merged the two companies under the name Centuri Engineering. The Penrose entity continued doing business as Estes Industries. Centuri Engineering model rocket products continued to be developed, marketed and sold from the Centuri offices in Phoenix as well, although the actual manufacturing of Centuri products was soon moved to the Estes facility in Penrose. Sales of Centuri model rocket products were never as successful as Estes brand products and the Centuri Engineering offices in Phoenix were finally closed and the Centuri product line was discontinued in 1983.
Following a hostile takeover of the Damon Corporation in 1989, Estes Industries was divested and became part of Hobby Products. The business name of the company was shortened to Centuri Corporation. In 1996, Hobby Products acquired the assets of Cox Products of Corona, California, a company involved with the design and manufacture of model airplanes and glow-fuel model airplane engines. Cox's assets were moved to the Estes facility. In 2002, the combined company was sold again and the company's name was changed to Estes-Cox Corp.
On August 30, 2002, Barry Tunick, who had been the Chief Executive Officer since 1991, acquired Estes-Cox Corporation from the private equity fund, TCW Capital, for the sum of $15 million. On January 15, 2010, Estes-Cox was acquired by Hobbico, Inc. On January 10, 2018, Hobbico filed for bankruptcy protection under the auspices of the United States Bankruptcy Court in Delaware. As a result of the bankruptcy, Estes-Cox was sold to Estes Industries LLC on April 12, 2018.