File Under Toner - This Is The End, Beautiful Friend 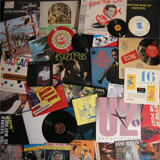 File Under Toner - This Is The End, Beautiful Friend

by
File Under Toner

FILE UNDER TONER - This Is The End, Beautiful Friend

We think the problems with this release (see below) are caused by some stupid spam/copyright-infringment filter, that has misread/misunderstood the liner notes. We have tentatively reuploaded the album, but we have "hidden" part of the credits. See file "credits.txt (liner notes)" or download the booklet to see full liner notes.

recording the silent final grooves of records. not so silent after all. playing them loud enough to capture the hiss, the pops, the clicks. adding a couple of digital delays, some EQ and filtering, a little reverb here and there… not much, really. it’s all in the records if you know where to listen.

of course it is difficult to listen to these grooves with automatic return turntables (stupid consumer-oriented machines). maybe that’s why you never paid attention.

you will probably have to raise the volume to play this album, which will add a little electronic hum, different with every equipment on which you play it. this is a (nice) feature, not a bug.

if you have the means, stamp these tracks on a three sided LP. you will have three free extra end grooves, and a blank side to needle-surf.

one last thing. probably some people will think this is not legal, i should not be allowed to do this, i am stealing somebody else’s copyrights (john cage’s?), etc...

nevermind, most people will just think this is not music.

"This Is The End, Beautiful Friend" is an album by File Under Toner, released in 2008 by the netlabel Hazard Records. It is released into the Public Domain and was hosted in the Internet Archive until last weekend.

The album "This Is The End, Beautiful Friend" was made by recording run-out grooves (supposedly silent) of thirty-six selected vinyl records and manipulating them both by analog and digital means (mainly by playing them on vari-speed turntables and adding delay, echo and reverberation). The audible result is a series of thirty-six short tracks of manipulated surface noise (mostly pops, cracks and hiss).

While there is nothing in these tracks that qualifies as "copyright infringment", the album (and its liner notes) adresses issues such as the limits of copyright ("do the silent run-out grooves have rights?"). Of course, the album also addresses other topics among which are authorship, originality, appropiation, indeterminacy, silence, fetichism, record collecting, concept albums, history of sound reproduction technologies...

"File Under Toner" is an experimental project from Barcelona-based musician Anki Toner. (http://www.ankitoner.com) Most of Anki Toner's works (18 albums so far, released between 1987 and 2010) address some (or most) of the above mentioned topics.

Hazard Records (http://www.hazardrecords.org) is a Public Domain netlabel (formerly a CDR label) started in 1998, with a catalogue of 63 albums so far, proud to host its output at the Internet Archive. It's catalog is a blend of experimental, avantgarde, improvisation, electronica and culture jamming albums. Some of them address the issue of copyright limits.

When we decided to upload all our albums into the Internet Archive, we contacted an administrator (Simon, at that moment) and tried to make clear what was our philosophy ("Some of us do not believe in Authorship, others do not believe in Ownership. None of us believe in Intellectual Property" is our description at www.archive.org/details/hazard_records), since we did not want to be a problem for the Archive. We received an implicit OK (or so we understood) and we have been proud hosts of the Archive since 2005.

On the other hand, we understand that some Archive users are uploading copyright protected files and that the Archive needs to avoid blatant copyright infringment to protect itself from abusive users. We know that the Internet is constantly changing and so are copyright laws. However we hope that the Internet Archive is still supportive of works that deal with exploring the limits of copyright and that it will not voluntarily remove these works. In this case, we hope that our album has just been accidentally caught in some sort of copyright infringment filter.

This is an interesting situation since the album credits mention (quite obscurely, though) some cases of copyright infringment, and that may have been the cause of it being caught in such a filter.

However, we hope that the deletion can be reversed. We would be grateful if you could spend a few minutes checking this case. If you need any further information, do not hesitate to contact us.

because there what is meant, stated, by the action of doing

and for those who like those "silent" last revolutions, the groove of looping silence... I recommend you to listen to this.

Uploaded by ankitoner on October 5, 2010