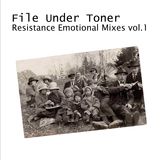 by
File Under Toner

Resistance Emotional Mixes (concept indebted to Superelvis' Resistance Emotional Music, of course) are blind mixes of cds brought by the audience and which the performer has not heard previously (not even monitorised with PFL). Describing these mixes as "blind", though is inaccurate: the correct expression would rather be "deaf mixes", since the only reference the performer has before the turns up the volume of one particular track is the blinking of the volume leds.

The resulting sound is highly dependant on the audience, and of course Resistance Emotional Mixes cannot be rehearsed.

It must be noted that the contents of this CD are probably illegal in some countries due to copyright issues. Nevertheless, it is not clear who broke the law:

a) was it the performer, who just played cds brought by the audience which he did not chose?
b) was it the audience, who brought the cds but did not play them?
c) was it the concert promoter, who did neither choose the cds nor play them, but provided with all the necessary elements for the law to be broken?

If none of them broke the law, maybe the contents of this CD are not (or should not be) illegal after all...