The Medicine-Men Of The Apache 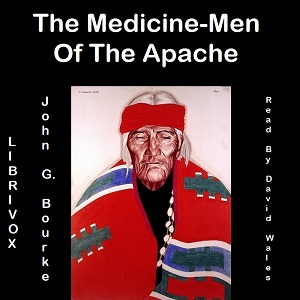 The Medicine-Men Of The Apache

LibriVox recording of The Medicine-Men Of The Apache by John Gregory Bourke.
Read in English by David Wales
“Herewith I have the honor to submit a paper upon the paraphernalia of the medicine-men of the Apache and other tribes. Analogues have been pointed out, wherever possible, especially in the case of the hoddentin and the izze-kloth, which have never to my knowledge previously received treatment.” (Letter of Transmittal). Bourke was a Medal of Honor awardee in the American Civil War whose subsequent Army career included several campaigns in the Indian wars of the mid to late 19th century in the American West. He wrote prolifically. He was mostly free of the unfortunate disdain for Native Americans common in 19th century America. He was quite admiring of many aspects of the Native American. “… Bourke had the opportunity to witness every facet of life in the Old West—the battles, wildlife, the internal squabbling among the military, the Indian Agency, settlers, and Native Americans.” (It is germane to note that this is a scholarly paper with many, many quotations wherein it is difficult to differentiate aurally between the quoted words and the author's words. Also, that the author often goes far afield from the Apache in drawing parallels in other cultures around the world.) - Summary by David Wales
For further information, including links to online text, reader information, RSS feeds, CD cover or other formats (if available), please go to the LibriVox catalog page for this recording.

For more free audio books or to become a volunteer reader, visit librivox.org.