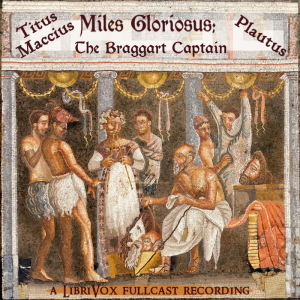 LibriVox recording of Miles Gloriosus; The Braggart Captain by Titus Maccius Plautus. (Translated by Henry Thomas Riley.)
Read in English by Alan Mapstone; Son of the Exiles; Jim Locke; ToddHW; Mike Manolakes; Matea Bracic; VocalPenguin; Sonia; Adrian Stephens; WendyKatzHiller; Sandra Schmit; Jenn Broda; Andrew Gaunce
Pleusicles loves Philocomasium, but she is kidnapped by Pyrgopolinices. Palaestrio, faithful servant to Pleusicles, witnesses this and goes to tell his master, but is captured by Pirates and ends up a servant to Pyrgopolinices as well. Palaestrio still gets word to Pleusicles, who arrives on scene. Palaestrio then invents a complex and daring plan involving mistresses, supposed twin sisters, disguises, family friends in the right places, and a monkey to try to escape Pyrgopolinices and reunite Pleusicles and Philocomasium. (A Funny Thing Happened on the Way to the Forum is based on this and two other Plautus plays.) - Summary by ToddHW

For further information, including links to online text, reader information, RSS feeds, CD cover or other formats (if available), please go to the LibriVox catalog page for this recording.

For more free audio books or to become a volunteer reader, visit librivox.org.

Uploaded by librivoxbooks on February 12, 2021