[MZ006] Aurora: Occur outside of the binary field EP 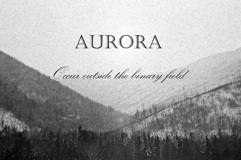 [MZ006] Aurora: Occur outside of the binary field EP

This is the debut release of the band based in Khabarovsk, Russia. Four men band Aurora is expanding the post-rock sounds close in ambient music with dreamy & psychedelic feelings. Impressive gently twin guitar play is located in the heart of its lyrically soft sounds. So tight & delicate rhythm section is shaping the flow of sedate sounds such as the great river Amur. And then, faint electronic sounds as the secret ingredient are accompanying in there.

It occurs outside of the binary field. The world alienated from the digital data and any kind of idealism. Post-rock towards to the flow of natural sounds. The sounds continue to occur, that flows outward from the outside to the outside. It is the sound of the ambience.

This is the sixth release from mini netlabel Mizou. As long as the music flows, this journey continues.

Tracklist:
01. A fight finishes
02. Bare feet in the clouds
03. Bright lanterns flash
04. Under the layer of north ices

Album Description:
«Aurora» the music project from Khabarovsk release its debut EP «Occur outside the binary field». EP includes four tracks as the result of the merger of night contemplation from four «Aurora» band members. The sounds represent the aura of the Far East, in the style of experimental post rock under the influence of ambient music. The band instruments creates a deep feeling of warmth, weightlessness and mystery.