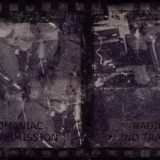 Radiomaniac, live transmission. Listen to the silence, let it ring on.

This is the second release of Radiomaniac, a post-rock band based in Sakhalin, Russia. The single entitled "2nd Transmission" obtains these stunning three new songs.

The sounds of Radiomaniac are becoming more dynamic and full of energetic than its previous EP. If you listen to the great first song "HTRK Sakhalin", you will understand it immediately. On this song the peculiar land called Sakhalin has been depicted in the style of totally hard edge sound. Second song "Anti-Matter" shows the clash of frenzy. Matter and Antimatter. Inorganic and organic. Third song "Butterfly's Cry" is a pure heavy elegy in post-rock style. We hear here is a cry that have not a voice of a beautiful butterfly fluttering in gruesome battlefield. It could pull out the history of stupid discord from the brink of oblivion.

Look to the north. The key to solving tangled yarn of all matters is hiding there.

This is the seventh release from mini netlabel Mizou. As long as the music flows, this journey continues.

Album Description:
2nd Transmission is the second release of Radiomaniac. This is a single that was recorded scrupulously the growth of the band sound in a short period of time. The beautiful melody and noise encrusted stunning three new songs have been recorded. The mass of the united sound would break through that thick wall.

«In our time, it is difficult to be astonished by a combination of aggressive distorted guitars and elements of club electronics. Some artists have live component as a dominating foundation and combine it with synthetic sounds. However, they are a sort of rockers who use electronics. Others have electronic beats and melodies as basis, and try to give some liveliness to their music by using guitars, bass, even bagpipe sounds. But they are electronics in fact. And it is close to impossible to determine the basis of some others. Radiomaniac might be labeled as these "others". Sometimes it is not clear whether it is a guitar or not - so unusual sounds it was made to emit. High technologies are connected with slightly underground quality. Was it done intentionally or not - doesn't matter - everything sounds organically. Some unique madness is woven into all four tracks - as a protest against the music canons, and at the same time using them.» © “Lestnica” Sakhalin journal.