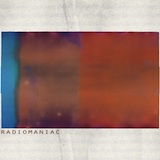 The world that we knew well is now going to break down very rapidly. Shattered fragments are shattered more micro, everything is arbitrarily connected to each other to the wrong side, the common sense from the past does not work at all, it is going to be formed a flimsy world where the lies infested.
Radiomaniac is singing like a groan in such a time of the world. Their songs on blurring blood that filled with blur frustrates are sounds like a new century blues. Radiomaniac, which started as an instrumental-oriented post-rock band in Sakhalin, then moved to St. Petersburg, being self introducing the vocal expression, experienced member changes, became four pieces unit, has grown up as the band to sharpening its music. The number of sounds is well reduced and arranged, and noisy guitars are not unnecessarily swayed, but those presences are pushed forward with a precise point. The rhythm by the bass and drums is sparkling distinctive personality even during suppression. With this release, space of musical expression is going to spread its scale to the full extent. And just like the land that was devastated by that merciless totalitarian, might be washed away with a divine heavy heavy rain and be cleaned it all.
Radiomaniac which had never hidden aggressive aggression, is now heading toward a deeply depressed sounding deep inside of human. Some wonder whether these changing is coming from this era of confusion. The reality of the harsh society mercilessly torment people who has a head, this usual situation is repeated infinity. Where is the music have to be shot out towards, in the situation of where is the tomorrow is not known by us all. Radiomaniac have created first self-titled ep, is trying to find a part of something like an around the big answer. There is no any certain answer here. Once it was said by a young poet that it was blowing in the wind in the past. However, in the age of post-truth, it is only the cheap copy of flame marketing that is blowing in the wind.

Band Description:
Radiomaniac is a four men band based in St. Petersburg. They are trying to break the horizon of shoegaze with an emotion intersected lively ensemble. The band grows at the appropriate time. Even in the frozen ground that closed every existence down in the long winter. A young post rock band jumped out of Sakhalin where the nothing flowed, did across the continent and flowed into the second largest city of Russia, where the band faced the wide wild world for the first time. Everywhere the nihilism is waiting with opening its mouth. Globalism is going to cover contemporary civilization with dark clouds. Can we escape from the complex despair of the 21st century. However, in such a world, the music of Radiomaniac increased its depth and taste, became simpler, and began to cut into objects that can not be determined easily. The evolving sound will pierce through the darkness and stick into the place it should reach.

Album Description:
From A to B and backward these. Simplicity is followed by something complicated and after it its goes something simpler. This music is not going to increase your appetite and not going to help you identifying yourself in individual realistic life. But it definitely pet you gently. Mild noisy guitars, moderately loud bass, immeasurably big heart of musicians with inclosed souls. Mysteriously something propagates whenever this music is played. Don't leave this transcendent sound without your attention.