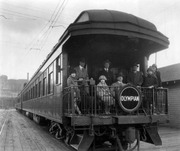 Magazines related to transportation, and driving. (Different from Travel magazines.)

Aviation Week & Space Technology, often abbreviated Aviation Week or AW&ST, is the flagship magazine of the Aviation Week Network. The weekly magazine is available in print and online, reporting on the aerospace, defense and aviation industries, with a core focus on aerospace technology. It has reputation for its contacts inside the United States military and industry organizations. The publication is sometimes informally called "Aviation Leak and Space Mythology" in defense...

Cycle News is a motorcycling magazine and website based in the United States, it was a weekly print publication from 1965 to 2010 and switched to a weekly digital magazine in February 2011. The magazine is headquartered in Irvine, California and is best known for coverage of all forms of motorcycle racing

Flight International (or Flight) is a global aerospace weekly publication produced in the UK. Founded in 1909 as "A Journal devoted to the Interests, Practice, and Progress of Aerial Locomotion and Transport". It is the world's oldest continuously published aviation news magazine. With a team of journalists and correspondents around the world, it provides global coverage of aerospace manufacturing and aviation operations in the areas of air transport, business aviation, defence,...

Small sets of transportation magazines, as well as unsorted contributions.

On Track Off Road Magazine

The Pacific Electric Magazine, published monthly from 1916 through 1953 for employees of the Pacific Electric Railway (the PE or PERY), a dominant mass transit firm in greater Los Angeles from its establishment in 1911 as the consolidated company of a number of interurban rail lines.

The Trail Blazer is the official bi-annual publication of the Tahoe Rim Trail Association. Inside each edition, you will find tales of inspiration, trail announcements, exclusive stories, and more.

Za Rulem (meaning Behind the Wheels in English) is a popular Russian monthly magazine about cars and the automotive industry. Prior to 1989, was the only automobile periodical in the USSR, designed for a wide readership. By the end of 1980 the magazine's circulation reached 4.5 million copies. Za Rulem was founded 23 February 1928, and the first issue was published in April 1928. Quote from the first issue : We hope that our readers will not only narrow circles of specialists, but the broad...